Separates From Troubled Newspapers to Focus on International TV 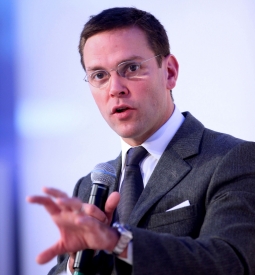 Mr. Murdoch had overseen the U.K. newspapers, among other parts of the company, since 2007. He continues as deputy chief operating officer at News Corp.

The change indicates that News Corp. continues to feel pressure from ongoing investigations into allegations of phone hacking and bribing of public officials by News International newspapers, such as The News of the World -- the Sunday paper shuttered over the scandal -- and The Sun, which just introduced a Sunday edition. In relinquishing News International, Mr. Murdoch removes himself from the spotlight trained on the U.K. papers.

At a Deutsche Bank media conference on Tuesday, Mr. Carey said that the company had discussed spinning off its newspapers but is focusing on increasing profit margins, Bloomberg News reported.

"He has demonstrated leadership and continues to create great value at Star TV, Star Deutschland, Sky Italia, and BSkyB," Rupert Murdoch said in a statement. "Now that he has moved to New York, James will continue to assume a variety of essential corporate leadership mandates, with particular focus on important pay-TV businesses and broader international operations."