READ THIS NEXT
Watch Elon Musk’s awkward ‘SNL’ promos—plus, why his hosting stint is so controversial 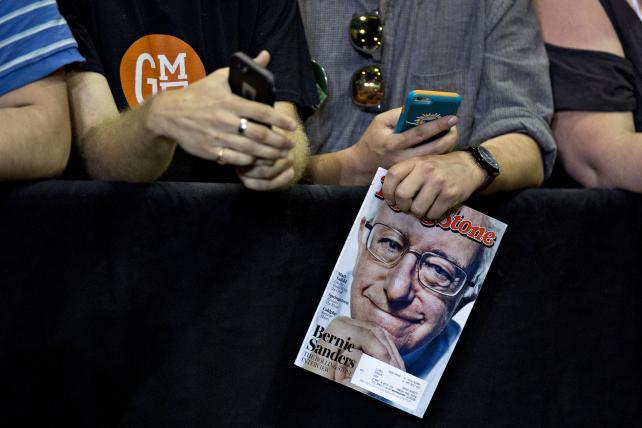 An attendee at a Tampa, Fla., rally for presidential candidate Bernie Sanders holds a copy of Rolling Stone in March.
Credit: Andrew Harrer/Bloomberg

There comes a time when even Jann Wenner needs a little help from his friends.

After a five-decade run full of interviews with pop stars and presidents, the founder of Rolling Stone is selling 49% of the iconic magazine to an Asian billionaire's son. It's the first time Mr. Wenner has admitted an outside investor, a deal that encapsulates the plight of an industry fighting to stay relevant in an online age. Wenner Media LLC also owns Us Weekly and Men's Journal.

Founded in 1967, Rolling Stone became a fixture of American pop culture, helping launch the careers of writers and creative artists over almost 50 years. But like many of its peers, the magazine has steadily lost advertising and readership to nimbler online alternatives. In 2014, Mr. Wenner tasked his son Gus with devising a digital strategy. Now Mr. Wenner, who started Rolling Stone from a San Francisco warehouse, plans to relinquish as much of his magazine as possible without ceding control.

"It's a big moment,'' Gus Wenner, the company's head of digital, said in a phone interview. "There is a great opportunity to take that brand and apply it into new and different areas and markets."

The new investor is Singapore-based BandLab Technologies, a budding digital music concern founded by the 28-year-old scion of one of Asia's richest families. Kuok Meng Ru, the third son of Singapore-based agribusiness tycoon Kuok Khoon Hong, graduated from Cambridge University with a mathematics degree and launched BandLab last year as a social network for musicians and fans. The startup is funded by private investors, including Mr. Kuok's father and JamHub Corp., a maker of audio mixers.

"Our growth in digital has been fantastic, but long term, my dad and myself recognize that in order to truly grow and truly transform the business -- and we have this incredible brand in Rolling Stone that means so much," they needed a partner in Asia, the younger Mr. Wenner said.

BandLab will have no involvement in the editorial side of the magazine. Rather, it will oversee a new Rolling Stone International subsidiary, which will develop live events, merchandising and hospitality.

Mr. Kuok said the two sides have been in discussions for about 15 months. "What has happened last 49 years has already shown that Rolling Stone is more than a brand to people," Mr. Kuok told Bloomberg News. "It is now our shared responsibility to take it into the future."

Rolling Stone currently reaches a global audience of 65 million people, according to the company. That includes 22 million domestic digital monthly users, almost 18 million social fans and followers, and nearly 12 million readers of the U.S. print publication. The average monthly unique visitors to its website rose almost 40% in the first half of this year from a year earlier. It publishes 12 international editions in countries including Australia, Indonesia and Japan.

"Our strategic partnership is focused on brand extensions into new areas we haven't quite fully been in the past, such as merchandising, live events, hospitality – they are areas we have dabbled in but never really seriously gone after," Gus Wenner said. "Meng and his team bring a great deal of understanding, infrastructure, know-how and act in that extraordinarily exciting market of Asia and beyond."

Cutting-edge coverage
The magazine made its mark in the 1970s and 80s with cutting-edge music and political coverage. Gonzo journalist Hunter S. Thompson wrote for Rolling Stone for decades, including publishing first in its pages "Fear and Loathing in Las Vegas," which later became a book and movie. Its stable of star writers included P.J. O'Rourke, Cameron Crowe and Lester Bangs. And it published in-depth exposes, including the 11,000-word, 1974 story of how heiress Patty Hearst went from kidnapping victim to radicalized guerrilla.

Even past its prime it could break through to the mainstream. A 2010 profile of General Stanley McChrystal that included remarks critical of the Obama Administration led to the general's resignation. In 2013, the magazine put on its cover the Boston Marathon bombing suspect Dzhokhar Tsarnaev, prompting outrage over what some saw as the glamorization of terrorism.

Under fire
Last year, Rolling Stone came under fire for its editorial standards. The magazine published an article about an alleged gang rape at a University of Virginia fraternity. The story turned out to be substantially false and prompted the magazine to request an independent investigation from the Columbia University journalism school.

For Mr. Kuok, Rolling Stone marks the latest of his acquisitions of music assets and brands, underscoring his efforts to build a global music empire. BandLab, his flagship business, is a cloud-based online community that allows artists to create, collaborate and share their music. In 2012, Mr. Kuok acquired Swee Lee, a sleepy 70-year-old distributor of guitars in Singapore. Since then, he has turned the company into a modern enterprise, selling merchandise online and offering music lessons. It's now the biggest distributor of instruments and audio equipment in Southeast Asia.

"We are focused on the consumer and the supply chain of music, and innovative business models around music that exist today," he said. "We see a lot of synergies. At the end of the day, the end consumer is the same. BandLab's goal is to be a global music business."