Looking for Jeremy Lin at the Time 100 Gala

Time Assembles Many of Its 'Most Influential People in the World'
READ THIS NEXT
Balancing consumer needs with campaign performance
Stephen Colbert and Cardinal Timothy Dolan
Credit: Kevin Mazur/WireImage 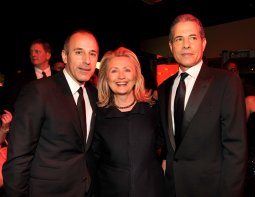 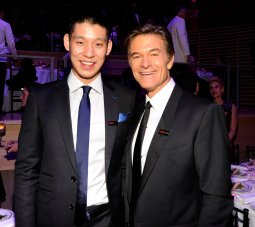 The Event: The annual Time 100 Gala
The Date: April 25, 2012
The Venue: Frederick P. Rose Hall at Time Warner Center
The crowd: Many of the Time 100, Time magazine's annual edit franchise calling out "the 100 most influential people in the world"
The Bar: A wide selection, but many suggestions to have some Chivas 25

You'd think it's be easy enough to spot a 6'3" NBA player even in a pretty crowded room, but Jeremy Lin proved elusive at the Time 100 last night.

There was Matt Lauer talking to NBC Universal's Lauren Zalaznick and Seth Meyers from "Saturday Night Live." John Waters chatted with Ann Coulter. Corporate bigshots milling around included Time Warner CEO Jeff Bewkes and Time Inc. CEO Laura Lang. Claire Danes and Tilda Swinton posed for pictures. And there were servers pushing glasses of Chivas 25, the evening's drink sponsor, even if you had a half-full glass in your hand.

But the closest we ever got to Lin, who is credited with saving the Knicks' season during a series of totally unexpected breakout games in February, was a conversation with the charming Bill Bradley -- who did more for the Knicks on the way to a Hall of Fame career than Lin has had a chance to even imagine yet.

Asked whether he goes to many Knicks games, Bradley said he always takes his daughter to one game of the finals. As far as the Knicks go, then, that 's a "no."

"They always make some mistake," he said. "They never draft anyone with character."

"Lin has character," he added. (Lin, to be clear, went undrafted -- one of the reasons Time called him "The dreamers' Most Valuable Player.")

During her remarks to the crowd, Secretary of State Hillary Clinton name-checked the city's newest sports stars. "We're here in the greatest city in the world, and I'm delighted that Time has included two of the newest residents: Jeremy Lin and Tim Tebow," she said. (Lin wrote Tebow's Time 100 entry.) "And for both of them, I'm sure they will have already discovered what a welcoming, exciting place New York is ."

It wasn't clear whether she was being sarcastic, but she may well have been -- Tebow got booed at Yankee Stadium last week.