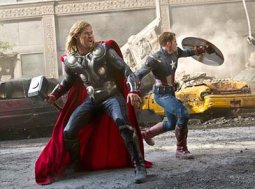 "The Avengers" is the top-grossing film of 2012 worldwide and No. 3 of all time, according to researcher Box Office Mojo. The movie sparked a turnaround for Disney's studio, which posted a profit of $313 million in the quarter ended June 30, up from $49 million a year ago and reversing an $84 million loss in the prior three months because of "John Carter." Revenue was little changed at $1.63 billion.

"The Avengers," released on May 4 in the U.S., is approaching $1.5 billion in worldwide ticket revenue, according to Box Office Mojo. The same month, Disney named former Warner Bros. President Alan Horn as chairman of the film division, replacing Rich Ross, who stepped down in April.

Revenue at the consumer division, another beneficiary of the Marvel acquisition, gained 8.3% to $742 million. Disney's interactive unit narrowed its loss of $42 million from $86 million, while revenue fell.