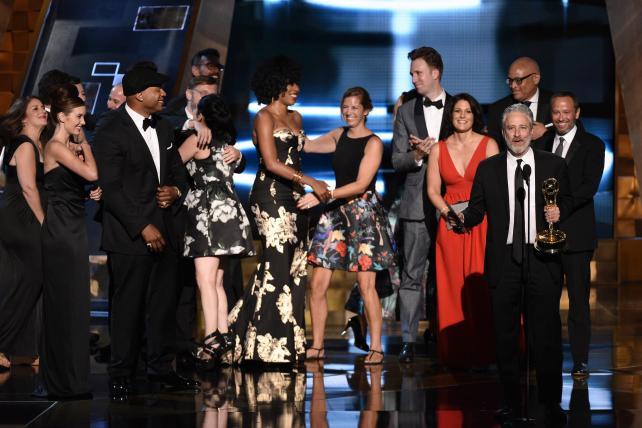 Jon Stewart with his 'Daily Show' colleagues at the Emmys in September.
Credit: Fox

Jon Stewart's retirement beard may not be long for this world, as the former host of "The Daily Show" has inked a new deal that should eventually lead him back to a regular TV gig.

The 52-year-old comic has hashed out an exclusive four-year production deal with HBO that will allow him to develop short-form digital content for the programmer's HBO Now and HBO Go platforms.

In the near term, Mr. Stewart will not appear on HBO's prime-time TV roster, which is already crowded with jocular pundits like former "Daily Show" correspondent John Oliver and long-time "Real Time" host Bill Maher. And if HBO's official statement is any indication, Mr. Stewart is looking forward to assuming a more low-key role than that demanded by a nightly talk show.

"Appearing on television 22 minutes a night clearly broke me," Mr. Stewart cracked in the statement. "I'm pretty sure I can produce a few minutes of content every now and again."

While details are scant, HBO said that Mr. Stewart's digital content would concern itself with "current events." Additional projects will be announced at a later date.

"Jon Stewart led a revolution that changed the face of TV comedy," said HBO president Michael Lombardo, by way of announcing the deal. "He graced our network nearly 20 years ago, so we're thrilled to welcome back his immense talents in this next chapter of his career."

Mr. Lombardo's nod to Mr. Stewart's earlier dealings with the network was a reference to his appearance as the host of George Carlin's 1997 special, "40 Years of Comedy."

HBO's big hire comes less than three months after Mr. Stewart hosted his final episode of Comedy Central's satirical news program. That Aug. 6 installment of "The Daily Show" averaged 3.47 million viewers and a 1.4 in the 18-to-49 demo, making it the second most-watched episode in the show's history, trailing only an Oct. 2008 show featuring then-Senator Barack Obama that drew 3.58 million viewers.

Mr. Stewart's departure followed on the heels of David Letterman's final night as host of "The Late Show" and preceeded the beginning of the Stephen Colbert era at CBS. Indeed, the last 10 months have given rise to the most sweeping changes in the history of late-night TV, and the fallout from all the talent shifts has yet to be assessed.

Shortly after Mr. Stewart first announced that he would be stepping down from the post he'd held for the better part of 16 years, the host told a reporter from The Guardian that he was dissatisfied with the inherent limitations of the nightly format, before adding that he had little interest in covering the 2016 presidential campaign.

In securing the services of Mr. Stewart, HBO has nailed down its third major talent deal in the last four months. In July, the network hired former ESPN wunderkind Bill Simmons to launch his own chat show as part of a multi-year, multi-platform deal, a coup which was followed in short order by its acquisition of the rights to telecast all-new episodes of the iconic kids' show "Sesame Street."

Two hours after the production deal was announced, Twitter had already logged some 55,000 Stewart-centric tweets, per the research firm Union Metrics.