NEW YORK (AdAge.com) -- LeBron James' decision to use a prime-time ESPN special to announce where he'll play for the next few seasons shows TV still matters more than Twitter, but the hourlong show may also hurt the basketball star's humble brand image. 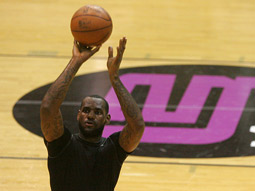 LeBron James
Credit:
AP
It's surprising that TV will get the big moment first, instead of the internet, where his day-old @KingJames Twitter account already has more than 232,000 followers, or even cellphones, where the phone-number harvesting going on at LeBronJames.com suggested he might try something like candidate Barack Obama's attempt to announce his running mate by text message. The special will also be broadcast on ESPN Radio.

But it's perhaps more surprising that Mr. James decided to go so big, almost ostentatious, with the revelation of his decision. He's spent years developing a spotless and humble reputation, so the show smacks of showboating overkill to many fans, even in Cleveland, which desperately hopes he stays put as a Cavalier.

Sponsors line up
And ESPN has also agreed to give up all advertising revenue from the special to the Boys and Girls Clubs of America, at the request of Mr. James' representatives. The program will be co-presented by University of Phoenix and Bing, ESPN said today. VitaminWater and McDonald's will also sponsor the program, it said, while Nike and Sprite will make contributions to the charitable initiative. VitaminWater, McDonald's, Nike and Sprite all have endorsement deals with Mr. James.

Mr. James' business manager, Maverick Carter, and his publicist, Keith Estabrook, did not respond to calls and emails.

A new ad campaign from Coca-Cola and Brunswick Bowling is fueling separate speculation that he'll stay, because a print execution for the campaign, which runs through Aug. 31 and well beyond his announcement, shows Mr. James in his Cavaliers uniform.

That aside, the superstar's announcement on Thursday night will end an interesting courtship by six different NBA teams, their fans and cities, and bring an economic boon to the franchise he chooses.

Mr. James had meetings with six teams -- the Cavaliers, New York Knicks, New Jersey Nets, Miami Heat, Los Angeles Clippers and Chicago Bulls. The Cavs, Knicks and Bulls are believed to be the three frontrunners, and all three put on quite the recruitment effort.

Pitching the free agent
New York City's tourist arm, NYC & Co., did a whole campaign called "C'mon LeBron" that featured everybody from Mayor Michael Bloomberg to a video skit in which actors James Gandolfini and Edie Falco reprised their roles from "The Sopranos," one of Mr. James' favorite TV shows. Mr. Gandolfini, as Tony Soprano, told Ms. Falco, as his wife Carmela, to find someplace nice for a friend to stay while in New York. The someplace nice turns out to be Madison Square Garden.

The hometown Cavaliers played off a grassroots fan campaign called "More Than a Player" by producing two videos to play during their meetings with Mr. James. The Cleveland Plain-Dealer reported the team pumped more than $500,000 into the presentation and the videos. Separately, a video was produced by the folks at the TV Land comedy "Hot in Cleveland," in which stars Betty White, Valerie Bertinelli, Wendie Malick and Jane Leeves plead with Mr. James to remain with the Cavs. Ms. White says she'll make it "worth his while" if he stays.

Chicago put on a full-court press for Mr. James, including a bold campaign done pro bono by Leo Burnett in which Mr. James received several packages over the course of four days, including a shoe box that contained a pair of Air Jordan sneakers with the question, "Can you fill these shoes?" The reference, of course, was to Chicago Bulls legend Michael Jordan.

The cumulative recruiting efforts by the teams to woo Mr. James came at a cost "in the millions," according to sports marketing expert Joe Favorito, the former VP-communications with the Knicks.

"But it's an investment in brands," Mr. Favorito said. "The teams want to show their fans that they're active and engaged and doing everything they can to get LeBron. The agencies and other companies do things like this so that it will lead to other business."

Of course, it will pay off in the end when Mr. James chooses a team -- and brings big residual dollars with him.

Mr. James could mean as much as $2.7 billion to the Chicago economy over six years if he ends up with the Bulls, according to a Crain's Chicago Business report quoting University of Illinois-Chicago economist John Skorburg. But that includes long, deep runs into the playoffs and NBA Finals each year, and it includes ancillary revenue for bars, restaurants and the like. Mr. James' presence on the Cavaliers is worth $300 million annually just to the downtown Cleveland area where the arena is located, according to Mr. Skorburg.