No App or Camera Required -- Just an NFC-Enabled Phone
READ THIS NEXT
Watch Elon Musk’s awkward ‘SNL’ promos—plus, why his hosting stint is so controversial

As print publications continue seeking ways to entice advertisers, Wired magazine and Lexus have teamed up to create what they say is the first mass-produced print ad embedded with a near-field communications, or NFC, tag. 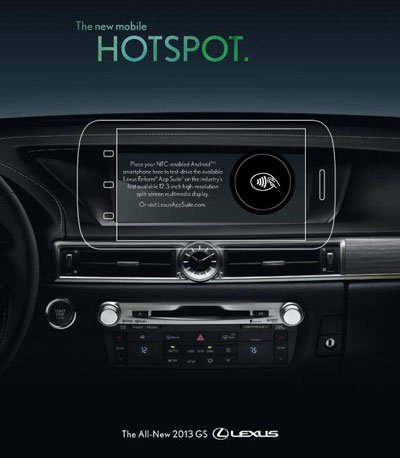 'Place your NFC-enabled Android phone here,' the ad says, to experience the apps in the car's dashboard.

The ad, which can be found in 500,000 subscriber copies of Wired's April issue, allows readers who have NFC-enabled phones -- such as the Nexus S -- to access a demo of the Lexus GS 2013's Enform App Suite simply by holding their phone up to the ad. Unlike the 2-D barcodes found in magazine pages, readers don't need to take pictures of anything with their phones' cameras. The phone automatically detects the NFC chip.

In the case of Wired and Lexus, that brings up a link on the phone's screen. Click the link and a welcome video loads introducing the car's in-dash App Suite. Users can then click on each of the app icons -- Bing, OpenTable, iHeartRadio, Pandora, MovieTickets.com and Yelp -- to see short videos explaing each app.

"This gives us a chance to bring the technology to life for a reader in a way that words just don't do," said Brian Bolain, national marketing communications manager for Lexus.

The ad also includes a link that readers without NFC-enabled phones can visit to access the same tour.

"Our estimates are that there around 3 million people in the U.S. with NFC-enabled smartphones," Mr. Bolain said. "We know it's a pretty small pool, but we need to do something more interesting in print to make it a little more of an interactive experience for those people who want it."

Mr. Bolain said Wired's tech-forward readership was a natural fit for such a campaign. And Wired has experimented with other interactive technologies in its print pages in the past.

In September, Wired worked with Showtime on an augmented reality experience that allowed readers who downloaded a specific app to get video previews of two Showtime series when they held their phone to the cover of the magazine or a Showtime ad within the issue. The NFC ad for Lexus does not require any app download.

"We have a pretty established reputation for doing things first and being experimental," said Howard Mittman, publisher of Wired. "And we have an audience expecting [ads like this], so it doesn't fall on deaf ears."