Why TV Stations Shouldn't Be Satisfied With Coming Windfall 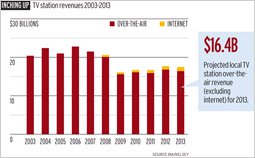 But while a pop in ad money is exciting -- midterm political elections and the Supreme Court ruling allowing more direct spending by corporations, unions and wealthy individuals on such campaigns could drop an extra $250 to $500 million on local TV -- it belies a potential danger: lulling stations into avoiding the necessary reinvestment and reinvention their business model requires.

For his part, Mr. DePalma is keeping his wits. To focus solely on the ad dollars, he said, would be "short-sighted." He also wants to develop new content-delivery ideas that bring in other revenue.

Who ever thought TV stations would look at ad money as just one piece of the pie? Yet they face an uncertain future, and there's fear the recent developments that have many local-TV executives excited are just phenomena that could be called a dead-cat bounce. The new vein of money "may hide some of the underlying issues we see coming up over the long haul," said David Cooperstein, research director at Forrester Research.

A host of new digital devices let consumers watch their favorite programs without ever having to tune in to a local CBS, ABC or Fox station. So smart TV executives are working to create new methods of content distribution and build other revenue opportunities even as they try to keep a steady flow of ad dollars coming through the door. Even so, Mr. Cooperstein suggested, the majority of the business wants to muscle through with old, once-reliable methods that may no longer work in a new-media world. "Local affiliates have not been known for being long-term strategists," he added.

Last mile
Mind you, TV stations aren't going to vanish from the face of the earth in two years' time. They continue to function as the so-called last mile in delivering popular TV phenomena -- everything from "American Idol" to the Super Bowl to the last season of ABC's "Lost" -- to important geographical markets. And, as demonstrated by the recent brouhaha over NBC's decision to move Jay Leno to 10 p.m. five nights a week, they still have power.

Even so, TV stations will have to be content with a narrower stream of revenue from traditional sources. TV-station revenue is expected to decline 22.4% to $15.6 billion for 2009, according to BIA/Kelsey, a media-research and consultancy firm. It's the first time since the mid-1990s that TV-station revenue has fallen to around the mid-$10 billion level, the firm said (2008 revenue was $20.1 billion), and BIA/Kelsey predicted revenue will only increase slightly each year through 2013.

And the political money everyone is clucking about may not flow as fast as some TV stations might like. Interpublic Group's Magna has forecast a 15% increase in political spending on TV for 2010, but Brian Wieser, the firm's global director-forecasting, doesn't think the recent Supreme Court ruling "causes a material increase" in the amount of election money flowing into TV-station coffers. Only political races that will prove integral to Republicans gaining control of Congress will spur outsize spending levels, he said.

To surf these roiling waters, some TV stations have put an equal amount of attention on developing ancillary "products" -- stuff outside local news-and-affairs programming on their primary TV outlet.

At Hartford's WFSB, for example, executives established a presence at the city's recently opened Connecticut Science Center. In addition to doing local weather from the site, the Meredith Corp.-owned station lets visitors to the center do their own local forecasts and send them to friends electronically.

Original content
Others are using different methods to establish greater control over their destiny. At Liberman Broadcasting, a privately held Spanish-language broadcaster that owns seven stations and has affiliate agreements with others owned by Belo, Hearst Television, Tribune and others, executives create and broadcast their own programming. This way, the company can amass a library of past shows and have more say over the integration of advertising into different pieces of content.

Other stations have tried to create mobile applications; soak up new categories of ad revenue, including obituaries; and pursue new forms of product placement previously believed to be forbidden, such as allowing coffee cups with sponsors' logos to appear on anchor desks during newscasts.

"The underlying trend is that the whole video market is on the brink -- two years away from some major changes," said Forrester's Mr. Cooperstein. A host of new media outlets will look to siphon off national and local dollars that currently go to traditional players. TV stations should try and do anything possible to steel them for the days ahead, he said. "Every incremental dollar that goes somewhere else is going to impact the TV business."