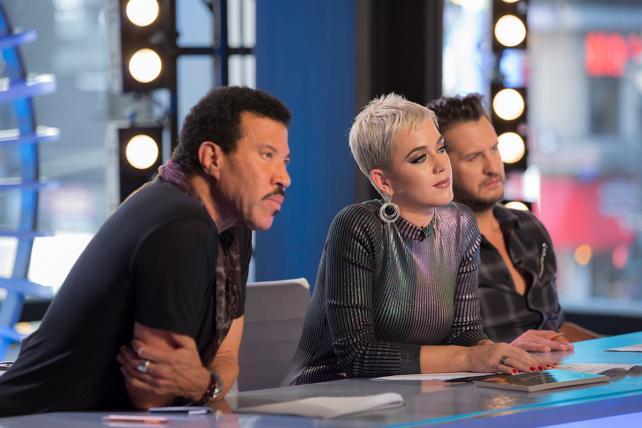 It won't make anyone forget the early incarnation of "American Idol" that struck so much fear in the heats of rival programmers that they would refer to it in hushed tones as "the Death Star," but ABC's revival of the once-colossal musical competition series delivered strong numbers for a Sunday night in 2018.

According to Nielsen preliminary data, ABC's first crack at "American Idol" averaged 10.3 million viewers and a 2.3 rating in the network's target demo, which works out to around 2.96 million adults 18 to 49. And while that's a fraction of the audience "Idol" regularly served up back in its mid-aughts heyday, the TV turnout marked a significant upgrade for ABC's Sunday 8-10 p.m. lineup, which season-to-date is averaging just 4.5 million viewers and a 1.0 in the demo.

Sunday night's "Idol" broadcast delivered ABC's biggest premiere ratings in the time slot since the supernatural drama "Resurrection" bowed to 13.9 million viewers and a 3.8 in the demo back in March 2014. Before last night's reboot, those two hours of ABC's Sunday night roster served as a placeholder for the 28-year-old "America's Funniest Home Videos" and the transplanted "Shark Tank."

That "Idol" managed to scare up such a sizable audience for ABC was particularly noteworthy in light of the fact that the show re-launched under a cloud of controversy. Returning host Ryan Seacrest has been accused of sexual harassment by a former "E! News" stylist, which was enough to make Best Actress nominees at the Oscars avoid his red-carpet interviews just a week earlier. And celebrity judge Katy Perry has found herself in an ongoing property dispute with a group of aging Los Angeles nuns who for some time now have waged a legal battle with the pop star over her purchase of their former convent. One of the nuns, 89-year-old Sister Catherine Rose Holzman, collapsed and died in court on Friday during a hearing related to the Perry case.

ABC on Sunday night also had to contend with Fox's Old School counter-programming strategy, in which the former conservator of "Idol" attempted to steal share from the premiere by airing an archived interview with NFL Hall of Famer/double-homicide suspect O.J. Simpson. Fox's two-hour "Lost Confession" special averaged 4.4 million viewers and a 1.2 in the 18-to-49 demo, one-tenth of a ratings point shy of the 1.3 it averages with its usual Sunday night fare.

"Idol" also faced some stiff competition in the guise of AMC's "The Walking Dead." While the zombie apocalypse drama last week eked out its worst numbers in seven years—you'd have to go all the way back to the fifth episode (Nov. 28, 2010) in order to find an installment of "Walking Dead" that averaged a lower demo delivery than last Sunday's 2.9—AMC's flagship series still beats out everything else on the tube in the target audience.

Later in the evening, ABC wisely used "Idol" as a springboard for its new drama "Deception," a high-concept curiosity about a disgraced magician who uses his powers to solve cases for the FBI. The 10 p.m. premiere lost 43 percent of its "Idol" lead-in, but in drawing 6.1 million viewers and a 1.3 in the 18-to-49 demo, "Deception" wiped the floor with NBC's returning sci-fi effort "Timeless" (0.9) and CBS's veteran Beltway potboiler "Madam Secretary" (0.8). If nothing else, "Deception" marks a not-inconsiderable improvement compared to former time-slot occupant "Ten Days in the Valley," which in October bowed to a miserly 3.44 million viewers and a 0.5 in the demo.

As much as ABC's preliminary "Idol" deliveries are reassuring for this day and age, they're all but insignificant in comparison to the Fox-run "Idol" of old. At its Season 5 peak, "Idol" averaged a staggering 30.5 million viewers and a 12.5 in the demo, which translates to a now unthinkable 16.3 million adults 18 to 49.

ABC gets its second bite of the "Idol" apple tonight, when the show goes head-to-head with NBC's "The Voice." Since returning for its 14th cycle on February 26, the Monday night installment of "The Voice" has averaged a 2.7 in the dollar demo.

Among the key sponsors of ABC's take on "Idol" are Macy's and the over-the-counter allergy medication Zyrtec. According to AdAge's annual survey of media buyers, a 30-second spot in "Idol" purchased during last spring's upfront bazaar fetched around $200,000 a pop.

Along with the nun-displacing Perry, the revamped "Idol" panel includes the country singer Luke Bryan and former Commodore Lionel Richie. The latter judge appears to have gone full-on Yoda since his "Dancing on the Ceiling" days, gnomically observing of one contestant, "Every once in a while, a Martian lands and we happen to see the Martian."