'Love Island' Turns It On for U.K. Millennials and Marketers | Ad Age
Skip to main content

'Love Island' Turns It On for U.K. Millennials and Marketers

READ THIS NEXT
Emmy Awards hit another ratings low for virtual ceremony
'Love Island' is stirring up British viewers and U.K. marketers along with them.
Credit: ITV

Brits looking for hot summer flings have been turning on "Love Island," the U.K. show that flies a bunch of twentysomethings to Majorca, matches them up into twosomes, has each couple share a bed, and then watches while they have sex -- we mean, find true love -- on live TV.

Sounds like tawdry niche viewing? Well, millions have fallen for it. Singer Adele discussed "Love Island" gossip with packed stadium audiences, viewing is up 73% from last year, some merchandise is sold out and the show is commercial television's biggest ratings puller this year for viewers aged 16-to-24.

Despite the sometimes-shocking sex (done mostly under duvets) swearing and smoking, the show, which airs on ITV2, also has a warmth and humor that, along with the gamification of relationships -- couples are given challenges like looking after a baby or responding to mean tweets from the public --keep audiences and advertisers hooked.

"Series two got double the audience of series one, so we were excited [for series three] and took it to market as a big part of our upfronts," said Kelly Williams, managing director of commercial at ITV. "But nobody expected this huge crossover, breakout success." (The first "Love Island" was a celebrity affair that aired briefly in 2005.)

"Love Island" is pulling in impressive ratings for a show on a digital channel, as the U.K. calls networks transmitted by means like cable or satellite, and has even beaten its mainstream broadcast parent on occasions. Up to 3 million viewers tune in to six shows a week, with a third of those watching via the broadcaster's online portal, ITV Hub.

The ad breaks are packed with major marketers -- including McDonald's, Kellogg's, PepsiCo and Procter & Gamble -- but "Love Island" has also attracted new entrants to TV advertising.

Boost energy drinks and Rekorderlig cider are on board, as well as fashion and beauty brands Pretty Little Things, Boohoo, British Style Collective, Swimwear 365, I Saw It First, Blanx and Hairburst. 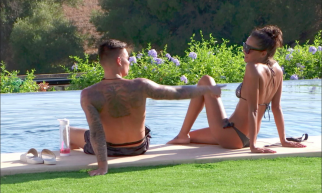 A quick look at the "Love Island Outfits" Instagram account (103,000 followers and counting) shows that many of the clothes worn on the show come from these same fashion retailers. Real-time search specialist Mporium has noticed big spikes in viewers looking for outfits worn by contestants during the show, as well as searches for holidays on the Spanish island of Majorca, where the show is set.

Pharmacy chain Superdrug is the headline sponsor for the second year, with high-visibility messaging going into and coming back from ad breaks, not to mention a ton of product placement. Scantily-dressed contestants are perpetually making use of sun protection products and toiletries from Superdrug as they bask in the heat or get ready for the evening activities.

Entertainment brand Ministry of Sound is also a sponsor for the second year, putting together house parties at the villa and sending in its own top DJs to play the tunes.

"Love Island" is co-produced by ITV Studios and Motion Content Group, which is part of WPP's GroupM. "These things are hard to predict, but ITV Network has been bold," said Richard Foster, CEO of Motion, while sipping from his own personalized "Love Island" water bottle (sorry, theyr'e sold out). "It's a big commission and a lot of hours to put onto a schedule. They've backed their own judgment, got it right and created something channel-defining for ITV2."

Viewers can go to the "Love Island" app to vote for their favorite couples and then stock up on merchandise that matches products used by contestants in the villa.

The show hits a "sweet spot," Williams said. "It has a young audience, it's part of culture and it sells stuff."

The U.K.'s biggest supermarket, Tesco, is selling "Muggy Mike" mugs named after one of the contestants, and fast-fashion store Primark has sold 170,000 official "Love Island" $8 T-shirts emblazoned with catchphrases from the show.

These phrases have become part of the national vocabulary. Expressions like "pied," "mugged off," "crack on," "absolute melt," "I've got a text" and "grafting" are taking on new and shifting meanings as the series progresses.

"Love Island" has won a place in popular culture that most media brands can only dream of. One contestant, Marcel, was in a hip-hop boy band a decade ago called Blazin' Squad; Spotify streams of the group's songs are up 2,500%, and there are talks of a reunion once the finale airs on July 24 and Marcel is back in the U.K.

Williams said the the show will be back in 2018, adding, "I think it's safe to say there will be a lot more demand from advertisers for next year's 'Love Island.'"

Grafting: Working hard to win someone over

My type on paper: The type of person you're attracted to

Melt: A negative adjective about a person. In "Love Island" lingo, the kind of person who might mug someone off.

I've got a text!: Said in an animated fashion. The show's action revolves around texts from producers, so when a contestant gets a text there's a lot of excitement.

Crack on: Starting to get to know a potential partner