AMC will air all eight episodes of "The Pitch" despite lackluster ratings for the first half of its run, according to a company spokeswoman. 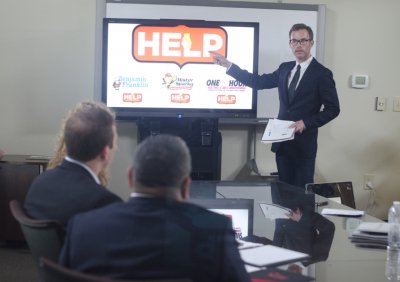 Low ratings have sparked posts like this one calling the show -- an unscripted series that pits ad agencies against each other for work -- a "disaster" perhaps headed for a "premature end."

And it's true that viewers for "The Pitch" aren't close to even matching "Mad Men," an AMC sibling that 's itself considered a niche show. The latest episode of "The Pitch" pulled in just 148,000 viewers from 18 to 49 years old when it ran on Sunday, according to Nielsen figures provided by AMC.

AMC plans to run the remaining four episodes all the same -- instead of yanking the show the way other networks sometimes have done. NBC pulled "The Playboy Club" last October, for example, after only three showings.

"AMC is extremely proud of 'The Pitch' and will continue to premiere the series Sundays at 11 p.m.," the AMC spokeswoman said.

AMC's fealty, however, should not be much of a surprise. Cable channels are far less likely than broadcast networks to halt a series before showing all the episodes they have on hand. That's partly because cable channels typically have thinner schedules, with fewer options for replacements and more flexibility to repeat episodes many times in a week, accumulating audiences in the process.

VH1 took "Megan Wants a Millionaire" off its schedule in 2009 after a contestant became a murder suspect. And A&E pulled "The Hasselhoffs" after two episodes in 2010, leaving six to go. But similar examples are relatively few.

The AMC spokeswoman also pointed out that the latest episode of "The Pitch" got 193,000 viewers aged 25 to 54, which the network considers more its demographic.

AMC originally premiered the series on a Sunday night, but moved the second and third episodes to Monday at 10 p.m. "The Pitch" returned to Sunday at 11 p.m. this week. Next Sunday's episode will see The Ad Store and Kovel/Fuller Advertising pitch for Frangelico liqueur.