Why Ad Pages Won't Ever Fully Return to Mags

Future Growth Must Come from Subs, Apps, Events and Innovations

NEW YORK (AdAge.com) -- When fashion magazines revealed how poorly ad pages sold in their important September issues, they called their weakness temporary and incidental. "This is not about magazines, this is about the recession," one executive said.

"It's going to be a while before it all comes back," said another.

But surely even the recession can't explain this many lost ad pages -- the dominant source of magazine income and measure of their financial health. Monthlies' ad pages through their August issues had already sunk 22%, according to the Media Industry Newsletter, with drops topping 40% at Dwell, Ebony, Men's Journal, Town & Country, Gourmet, National Geographic Traveler, Veranda, Saltwater Sportsman, Teen Vogue, Sound & Vision, Wired and others. Then ad pages in fashion and beauty titles' big September issues -- the most important month for them and for their advertisers -- fell by double digits for nearly everyone.

Some of those pages will return with a broader recovery, but many, sadly for the industry and many devoted readers, probably won't. The leading magazine brands and publishers will survive, but they'd better already be pivoting toward new revenue streams if they want a good position after the recession.

"Any publisher who thinks that magazine spending is going to rebound to their levels before 2008 and 2009 is naive and deluding themselves," said Lee Doyle, North American CEO at Mediaedge:cia, one of the leading media agencies. The recession is only accelerating the fundamental changes going on, he said. Spending is moving into other areas -- with or without the downturn.

"I don't think ad pages will return to 2007 levels," said Greg Warren, president for client services at MediaVest USA. "The recession triggered relooking at everything. This has just been a scouring of everything. And print stands out as the one that is definitely being singled out as at most risk." 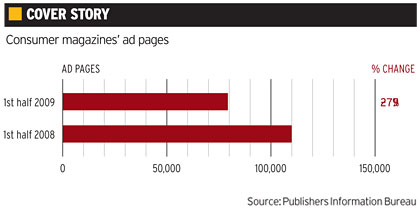 Bad for business
It's not just the fashion glossies taking hits that could leave a mark. Look at the business magazines, including BusinessWeek, an iconic title now on the block and receiving some very unflattering valuations from other media. They're hoping to eventually see robust recoveries in ad pages for financial-services firms. But they may be in for a long wait.

"What we're witnessing is a shift in the structure of the marketplace, the impact of reduced availability of credit at a consumer level, at a marketer level and at a manufacturing level," Mr. Warren said. "I don't think that's going to go away. Will they start spending again? Yes, but not as much."

Great brands will make it through and find ways forward, said Martin Cass, president of Carat in the U.S. But everyone needs to understand that this is systemic, not cyclical, he said. "Those people who close their eyes and say it will be all right when it comes back, well, good luck with that."

The magazine industry can reasonably argue that the hardships facing other media channels, and all kinds of businesses at that, demonstrate that their woes reflect the economy, not something specific about magazines.

And certainly all media sectors are trending down right now -- even the formerly fast-growth online- display business. But with the dominant medium, TV, managing to limit sales declines to low-single-digits, it certainly seems like other forces are weighing down magazines.

Just better than newspapers
Among "traditional media," magazines seem poised for a hit only topped by newspapers. From 2009 through 2013, consumer-magazine ad spending in the U.S. will slide faster -- falling at a compound annual rate of 0.9% -- than all the competition except newspapers, according to the PricewaterhouseCoopers Global Entertainment and Media Outlook, published in June. TV advertising, the closest other declining medium, will sink 0.6%, according to the forecast, while radio holds flat, out-of-home advertising grows 2.5%, the internet and mobile segment climbs 6.3% and video-game advertising jumps 12.9%.

To be clear, and contrary to what some digerati will have you believe, this isn't about any sort of audience declines. Consumers continue to seek magazines. More than 189 million adults in the U.S. have read a magazine within the past 30 days, according to the most recent survey by Mediamark Research & Intelligence. Magazine advertising is also more trusted than ads on the web, on the radio or on TV, the survey found.

That's why people such as Jack Haire, the Time Inc. veteran who's now CEO of Parade Publications, conclude that major marketers will still need magazines once this downturn is done. "If you have a big business, you need to reach a large number of customers and prospects to fill up your funnel, whether you're selling coffee or whatever it might be," he said. "And I'm not suggesting for a second that things aren't going to change pretty dramatically. I just don't think that all of the changes today mean that everything new is going to get a major marketer to the Promised Land."

There's truth in that. For all the direct, customer-relationship marketing, digital and social options out there today, there's still plenty of need for strong mass-market ad channels.

But many executives across the media industry -- on the web at least as much as in magazines -- may still be making the dangerous and outdated assumption that if you build the audience, the ad dollars will come.

Cheaper competition
That's no longer guaranteed. Marketers have so many more options for reaching their customers than they had even 10 years ago, many of them far cheaper than the usual mass buys, that the pool of media dollars is diminishing as a share of marketing dollars. Supply is outstripping demand.

Marketers are also applying stricter tests to all their efforts and, influenced by our rising on-demand culture and economy, seeking faster and faster results. Jim Spanfeller, outgoing president and CEO of Forbes.com, feels this is what's hurting magazines. 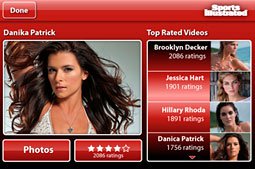 SWIMSUIT APP SCORES: SI's iPhone app shot to the top of the 'paid lifestyle' category.
Digital media is increasing the demand for instant accountability, he said, even though it falls short in many ways itself. "I'm not saying magazines don't work, just that it's hard to measure," he said. "One of the reasons is they [accumulate] so slowly. Depending on the frequency of that magazine, the audience can [accumulate] over six weeks to three months. Measurement is a dicey thing to begin with. But it's also hard to have patience for that long."

Another problem is the ease with which digital matches or improves on many of magazines' key attributes. "Marketers continue to want to strengthen their brands, but it's hard to say that magazines are uniquely equipped to do that," said Mediaedge's Mr. Doyle. "TV does that pretty well, too." Magazines can tell a deeper story than TV, but now the web can do that, too.

Other streams
That means, for one thing, getting off the addiction to ad pages as the chief way to monetize magazines. "Hopefully once the recovery is under way, magazines will be judged on desirability and their ability to monetize that interest," said Gary Armstrong, former CMO at Wenner Media. "For many titles, ad pages were the obvious 'quotable' of their success. But to survive, brands now need to find alternate revenue streams. Magazine brands should be judged on that."

All publishers have to do is get established in all the right new spaces. "Beyond ad pages and beyond display digital and rich-media ads, we are seeing interest in events, in partnering building sponsorship programs, different kinds of content opportunities, social-media opportunities and so on," said Ellen Oppenheim, CMO of the Magazine Publishers of America. "If you look at magazine-ad-page growth in the old context," she added, "you're missing what the real opportunity is, not just for magazines but for marketers."

So it was great to hear from Time Inc.'s Sports Illustrated last week that its $2.99 "SI Swimsuit 2009" iPhone application had shot to the top of the 'paid lifestyle' category after one day. Men's Health, part of Rodale, is out with a very innovative paid app that lets people buy more content for it from within the app itself -- no need to go back to the app store or the web. Rodale's also got some great paid-membership clubs running on the web. Meredith said last week it had bought a stake in The Hyperfactory, a mobile specialist, following earlier acquisitions of digital and database marketing agencies. And Conde, the center of September scrutiny, is busily fielding advertiser requests for programs integrating lots more than ad pages.

"The requests for integrated marketing have increased dramatically," said Lou Cona, Conde Nast Media Group's senior VP. "We have about 90 programs that we've taken briefs on, and quite a bit of them are in the pipeline or being sold."Magazines, of course, have been talking about this stuff for years, and exploring it as well. "Every print presentation I sit through, they say they're not about print, but then spend about 70% of their time talking about print," said MediaVest's Mr. Warren. Even after the recession abates, it seems, that is finally going to have to change.