During The Same Period, Digital Circulation Doubled.
READ THIS NEXT
WarnerMedia opens up HBO Max ad inventory to entire marketplace

Magazines' downward trend at newsstands continued in the first half of this year, with single-copy sales falling roughly 10% from a year earlier, the Alliance for Audited Media said Tuesday in its semiannual Snapshot report. Newsstand sales fell 8.2% in the second half of 2012. 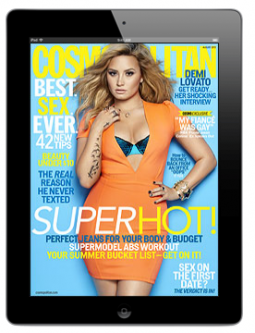 But paid and verified subscriptions held steady in January through July of 2013, helping to buoy overall circulation, which slipped only 1%.

And publishers' digital editions continued their steady march upward. For the first half of 2013, the number of digital replica editions roughly doubled to 10.2 million, compared with 5.4 million the previous year, the Alliance for Audited Media reported.

"Today's report is basically a continuation of what we've seen over the last few years," said Neal Lulofs, exec VP at the Alliance for Audited Media. "Digital circulation, which is a small segment overall, is growing quite rapidly. Clearly, people are buying and reading magazines on those tablets. At the same time, declining newsstand sales has been fairly consistent."

The Alliance for Audited Media, formerly the Audit Bureau of Circulations,compiled total circulation for 390 magazines, which reported their paid and verified subscriptions and single copy sales to the organization.

The magazine industry's trade group said in a statement Tuesday that the Snapshot report does not offer a complete look at the magazine industry. The 390 major magazines included in the report are just a fraction of the more than 7,000 titles sold in the U.S., it noted.

"Audited circulation, while an important metric, represents only physical copies and not the hundreds of millions of people that Magazine Media brands reach," said Mary Berner, president and CEO at the MPA, the Association of Magazine Media, in a statement. "That's why it is crucial to view the latest Snapshot numbers in the larger context of audience and other metrics that paint a fuller, more accurate picture of industry vitality."

Newsstand sales, the statement continued, only account for around 10% of overall circulation, and AAM measures only a portion of that.

Hearst's Cosmopolitan, the No. 2 magazine at the newsstand with sales of more than 1 million, reported a 24% drop in single-copy sales. Its overall circulation was flat.

Newsstand sales remain under pressure but digital circulation is reason for optimism, Mr. Loughlin said. "We feel good that we have happily found and are building a third channel of circulation and that gives the magazine industry more stability and more opportunity," he said.

One magazine that was noticeably absent from the report was Newsweek, which was sold to IBT Media this week. The magazine stopped printing at the end of 2012 so the Snapshot -- had Newsweek reported -- would have shown its performance thus far as a digital-only property.