Secrets to Bucking an Industry-Wide Decline
READ THIS NEXT
Beyond MyPillow: the other biggest brand advertisers on Fox News revealed

Among the magazines with the largest number of single-copy sales, only four saw increases at the newsstand through the first half of 2014: Prevention and Women's Health, which are owned by Rodale; HGTV Magazine, a joint venture between Hearst and Scripps; and All You, a Time Inc. title.

Industry-wide, single-copy sales slipped 11.9% from January through June compared with a year earlier, according to a report Thursday from the Alliance for Audited Media, which tracks magazine circulation. That's worse than the 11.1% decline magazines experienced during the last six months of 2013.

The report notes that sales were likely hurt by the June closure of Source Interlink, a company that delivers magazines to newsstands. Weeklies endured the brunt of its closure, affecting a company like Time Inc., which publishes weeklies Time, People and Sports Illustrated.

Meanwhile, paid subscriptions were down 1.8% during this period, with total paid and verified circulation off nearly 2%, according to the report.

Magazine single-copy sales have been declining for years as readers increasingly consume media on digital devices. At the same time, retail outlets have replaced some of the coveted space in checkout aisles with products like candy to help bolster their own revenue, further hurting magazine sales.

Here's how Prevention, All You, HGTV Magazine and Women's Health bucked this trend. 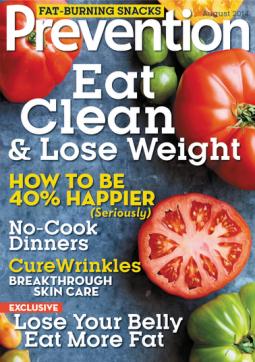 Prevention magazine, which is owned by Rodale.

Prevention, a digest-sized magazine that sells for $3.99, focuses on healthy living, a topic that's especially appealing in the beginning of the year (ahem, New Year's Resolutions).

The places where Prevention is sold have contributed partly to its gains, according to Anne Alexander, senior VP-editorial director at Prevention. "Placement helps," she said. "We are at the checkout, so we're top of mind."

"We're also trying to occupy more mind share in places where people are consuming their media," Ms. Alexander added. To that end, Prevention passed 1 million fans on Facebook. A TV special, "Love Your Whole Life," based on Prevention's January 2014 "Best Year Ever" editorial franchise, ran in more than 130 markets, including New York, L.A. and Chicago. And Ms. Alexander, who is the co-author of New York Times bestseller "The Sugar Smart Diet," has appeared on TV multiple times to discuss the topic and her book. 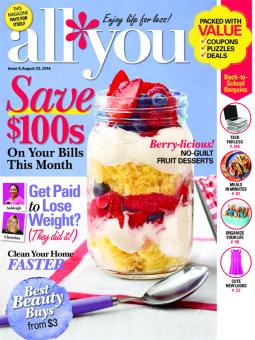 All You is owned by Time Inc.

All You, a magazine aimed at the budget-minded consumer, was sold only at Wal-Mart until April, when the magazine was rolled out to newsstands in other retail locations. The move helped boost sales, according to Nina Willdorf, editor of All You.

Consumers continue to show interest in magazines that make them better shoppers, she added. "We are a smart shopping brand at a time when Americans in general are really looking for value in their everyday lives," Ms. Willdorf said. And for those budget-conscious shoppers, the All You price seems to be about right at just $2.99.

Delicious-looking covers also help. The March issue was the best-selling edition between January and June -- before the magazine extended its reach outside Wal-Mart. The cover featured cupcakes. "They were a great idea that we made you feel like you could do," Ms. Willdorf said. 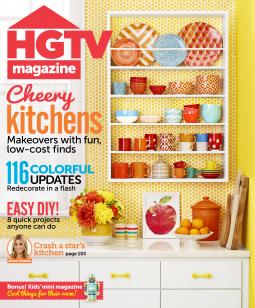 HGTV Magazine gets a big-time assist from the cable network of the same name.

It "taps into a huge audience of loyal fans of the network and its stars," an HGTV magazine spokeswoman said in an email. "HGTV is an excellent partner, and we work closely to take advantage of synergies between the brands." 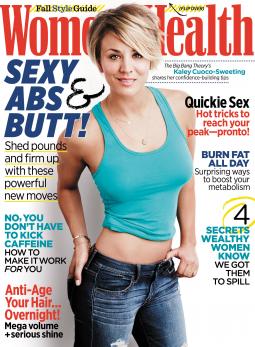 Women's Health is owned by Rodale.

Women's Health, which sells for $4.99 at the newsstand, also benefits from Americans' annual quest for healthy living tips in January and February. But its digital strategy contributed greatly to its newsstand gains, according to Michele Promaulayko, editor in chief of Women's Health.

Like most magazines, Women's Health promotes its print issues across a variety of channels, from TV appearances by its editors and cover stars to promotions on social media sites like Instagram, Twitter and Facebook. September cover star Kaley Cuoco-Sweeting, for instance, shared pictures of her cover to her nearly 800,000 Instagram followers. That gives the magazine a big lift. But key to this promotional strategy is that Women's Health doesn't put editorial content from the current issue on its website until the issue has already spent weeks on the newsstand, according to Ms. Promaulayko. "We tease the cover story, but say it's on newsstands -- go pick it up," she said.

The content ultimately becomes available online. In the meantime, however, the magazine's web editors are filling the site with original content. "The online team is so prolific in their own content creation," Ms. Promaulayko said. "As we get stronger on every platform, there's a halo effect."