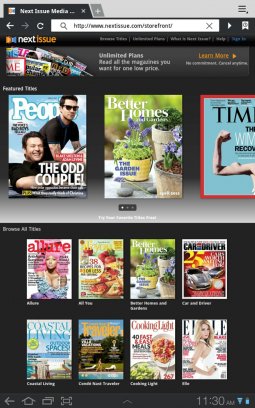 The Next Issue Media newsstand

The service, from Next Issue Media -- a joint venture of Conde Nast, Time Inc., Hearst, Meredith and News Corp. -- prices unlimited monthly and biweekly titles at $9.99 per month. A premium version that also includes weeklies costs $14.99 per month. Consumers will read the titles on Next Issue Media's new app.

The service is initially limited to certain Android devices, including the Samsung Galaxy Tab and the Motorola Xoom, but Next Issue Media plans to seek Apple's approval for an iPad version in coming weeks.

Subscriptions to many monthlies' tablet editions cost $1.99 a month, so consumers could get their money's worth from the basic $9.99 monthly plan if they read five or more tablet editions.

But consumers who prefer print can still find very competitive pricing there. Fitness magazine is available in print right now, for example, at $5.99 for a whole year. And subscribers to Time Inc. and Conde Nast magazines already get their corresponding tablet editions at no extra cost.

Whether all that unnecessarily limits the plan's appeal or productively protects print editions will depend on your perspective. Wenner Media Chairman Jann Wenner warned last year that publishers might be unnecessarily rushing to tablet editions at the expense of their print products.

But the Netflix-style plan could also expand magazine consumption.

"What we know from consumers in other categories is that when they have an option to pay for something on an unlimited basis, they consume more in that category as a result," said Steve Sachs, exec VP-consumer marketing and sales at Time Inc.

Next Issue Media's new app also lets consumers read each participating magazine's tablet edition in one place, hopefully eliminating some of the friction that comes with downloading a different app for each magazine and figuring out a new navigation scheme for many.