Not Just Another Manly Monday

MINNEAPOLIS (AdAge.com) -- For such a female-focused medium, it certainly was a macho Monday -- at least as far as programming was concerned. As for the audience? Well, that was another matter ... 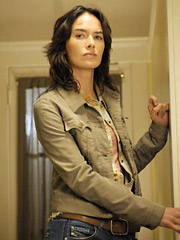 Tough Gal: Fox's 'Terminator: The Sarah Connor Chronicles'
Credit:
Fox
Fox, for instance, ran an original episode of the remade version of Arnold Schwarzenegger's "The Terminator" -- "Terminator: The Sarah Connor Chronicles" -- which tied for the 8 p.m. ET lead (along with NBC's "Deal or No Deal") with a 2.1/6 rating and share in the ad-centric adult 18-49 demographic. It followed up with the continual convict caper of "Prison Break," which was down slightly from last week to a 2.4/6.

Despite the tough-guy (and gal, Sarah!) image, 51% of Fox's audience in the demo were women, indicative of a trend of male images and female viewers.

NBC's "America's Toughest Jobs" labored to a 1.7/4, off about a third from its season average. But the gritty jobs still failed to find many men applying their time, as it, too, had more women (56%) watching than men. "Dateline" followed with a 1.3/3 as the network finished fourth with a 1.7/4.

'Batman' Not Just a Guy Thing
ABC countered with a guy flick, "Batman Begins," but the fickle male audience only made up half the delivery for ABC on Monday night, as perhaps "The Dark Knight," the next chapter in the Batman saga and this summer's top-grossing movie, left the network languishing in last place with a 1.5/4.

NBC's and ABC's fourth- and fifth-place finishes were also due to the CW programming to a different gender (not to mention a whole new generation), as "Gossip Girl" was whispered about by a record demo delivery of a 2.0/5, which helped "One Tree Hill" (1.8/4) hit a two-year high. Overall, by playing to their strength with a 77% female audience, the CW was a competitive third with a 1.9/5.

So why the disconnect between guy TV and women viewers on macho Monday? Well, as usual, guys were indeed ready for some football, settling in after Hank Williams' rallying cry to watch the Dallas Cowboys beat the Philadelphia Eagles on ESPN's "Monday Night Football." The game easily ran past all broadcast and cable competition, huddling a 68% male audience for an overall first-place 7.8/21.

WHAT TO WATCH
Tuesday: Say goodbye -- or good riddance -- depending on your taste, to TV's most successful summer show, ABC's "Wipeout," which has its season finale.
Wednesday: Get away from campaign 2008 -- but not presidential politics -- as TCM continues its Wednesday series "American Politics in the Movies" with "Abe Lincoln in Illinois" and "Tennessee Johnson," a rare look at impeached President Andrew Johnson.

WHAT TO WATCH FOR
It's week two for "Fringe," which will be a key indicator of whether the Fox series stays mainstream.