Maxim Magazine Goes on Sale in the App Store 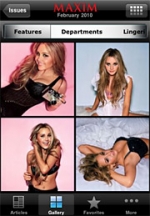 Despite the impending arrival of Apple's iPad, of course, the magazine industry remains some distance from its current dream of fully stocked and popular digital newsstands. GQ had sold just 12,000 copies of its January issue as an app when it reported the first results two weeks ago.

You'll notice, for another example, that the three big magazines with app versions so far are all aimed at men.

"We've put together an iPhone app for two reasons," said Maxim editor in chief Joe Levy. "The first is we're a young men's magazine. Guys love technology. It makes sense for us to exist in every platform they use.

We'll know magazines are further along in their effort once Veranda or Ladies' Home Journal start moving copies in the App Store.

Subscriptions
Readers also still can't buy subscriptions to GQ or Esquire's magazine apps, although GQ has promised repeat buyers will be able to get future copies for $1.99 starting with the March issue. Maxim's app advances the cause a bit by arriving with subscriptions available alongside single copies.

That reflects the fact that the new digital versions sell in a slightly different ecosystem, Mr. Levy said. "This is the pricing that makes sense to us given what we have seen in the App Store and what we believe makes sense for the consumer," he said. "The question isn't what a yearlong subscription to the app costs against the print cover price; the question is what the app subscription costs against buying the app 12 times."

The Maxim app, which it developed with the mobile application company Bite Sized Candy, still has some evolution ahead. It won't include all the print editions' regular advertising until the May issue. The app will also eventually add video content and updates between regular print editions, Mr. Levy said.