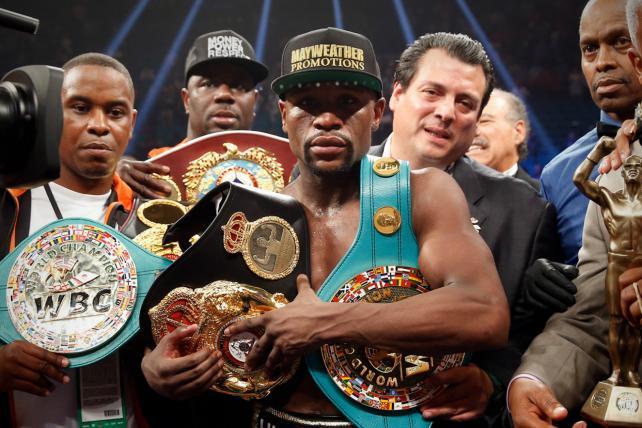 Floyd Mayweather after the fight with Manny Pacquiao.
Credit: HBO

Floyd Mayweather's victory over Manny Pacquiao two weeks ago probably will generate at least a record $500 million in revenue, based on domestic pay-per-view numbers released today.

The welterweight unification bout, won by Mr. Mayweather in a unanimous decision, generated $400 million in U.S. pay-per-view revenue on 4.4 million buys, according to a joint statement from promoters and HBO and Showtime, the two networks that co- produced and co-distributed the event. The fight cost anywhere from $89.95 to $99.95.

Throughout his career, Mr. Mayweather has repeatedly stated his goal of making at least $100 million in a single fight. These numbers show both he and Mr. Pacquiao will both eclipse that number for their 36 minutes in the ring on May 2.

About 30% to 40% of that total $400 million domestic pay-per-view revenue is divided among the cable companies and satellite providers. Another 7.5% is shared by HBO and Showtime, with the rest going to the fight purse divided 60-40 in Mayweather's favor.

The pay-per-view total is the largest revenue chunk for a fight that organizers originally estimated would generate at least $300 million. The fight's sponsorships (at least $11 million), international rights ($35 million) and gate ($71 million) were also records, Pacquiao promoter Bob Arum said before the fight.

The start of the fight, which went the full 12 rounds at MGM Grand Garden Arena in Las Vegas, was delayed more than 30 minutes to allow providers to settle ordering issues, according to ESPN. The network reported last week that some carriers were issuing refunds to those whose orders were not properly fulfilled.

The fight was distributed in 175 countries, according to the companies. Showtime is owned by CBS Corp. HBO is a subsidiary of Time Warner Inc.