LOS ANGELES (AdAge.com) -- Just how tough has the media space become? The nation's top 100 media companies eked out 0.8% revenue growth in 2008 -- and the reported revenue for top media firms in the first half of this year fell 4.3% from a year ago, according to Ad Age's analysis.

So not only was last year's Media 100 revenue growth the lowest since 1991, this year it's on track to show the first decline since Ad Age began ranking top media firms in 1981.

Remarkably, 11 of last year's Media 100 firms have plunged into bankruptcy reorganization, overwhelmed in most cases by shrinking revenue and debt loads taken on during the blind optimism of the boom. Print media dominate the bankruptcy list: six newspaper companies, two magazine publishers and two yellow-pages publishers.

That points to the momentum going toward digital-media firms, right? Not so fast. Interactive is a mixed bag of hype and hope, with media revenue surging in 2008 at Google (up 23.2%) and flagging at Microsoft Corp. And when it comes to revenue, Facebook and Twitter aren't worth Twittering about at this stage.

Ad Age's 100 Leading Media Companies report offers a bottom-up view of the media business, tallying revenue from an array of products and services. Revenue sources include advertising, subscriptions, sales of movie tickets and DVDs, and fees from TV production/licensing.

It's no surprise that ad spending is severely depressed: U.S. measured-media ad spending fell 4.1% in 2008 and then plunged 14.3% in the first half of 2009, according to WPP's TNS Media Intelligence.

Media 100 revenue is holding up better because of the diversity of revenue sources. Subscription and fee revenues, for example, are faring better than ad revenue.

Time Warner had held the No. 1 spot since 1995. It is on track to rank No. 3 (behind Walt Disney Co.) in next fall's Media 100 report after its planned spinoff of AOL as a separate public company later this year.

Five of the 10 largest media firms are cable/satellite players: Comcast, DirecTV Group, Time Warner Cable, Cox Enterprises and Dish Network. In 2008, the sector accounted for one-third of media revenue for the Media 100.

Newspapers on bottom
Sector performance varies widely in the Media 100. The biggest losers are no surprise: newspapers, where revenue plunged 13.5% in 2008. Magazines did better, with revenue falling 6.9%. Revenue for broadcast TV (including networks and local stations) dropped 4.6%.

Revenue for the Media 100's digital sector rose 3.6% last year. Digital was held in check by declines in media revenue at AOL, EarthLink and Microsoft.

Cable networks' revenue rose a robust 7.4% in 2008. That sector has outperformed network TV in ad-revenue growth. Cable networks also get the benefit of fee revenue, effectively paid by consumers to cable systems and passed on to cable networks.

What about all those media bankruptcies? Chapter 11 is not the final chapter. Newspapers, magazines and cable systems continue to operate while media companies work to slash crippling debt. The media industry's financial restructuring is costly for lenders and private-equity firms that placed bad bets in the boom. But the media industry is poised to emerge with less debt and stronger balance sheets.

Companies in declining categories such as newspapers can emerge from Chapter 11, but that hardly resolves more basic issues. They still must grapple with a consumer media market in flux, shrinking revenue, weak ad spending and little upside offered by a tepid economic recovery. The next chapter has yet to be written. 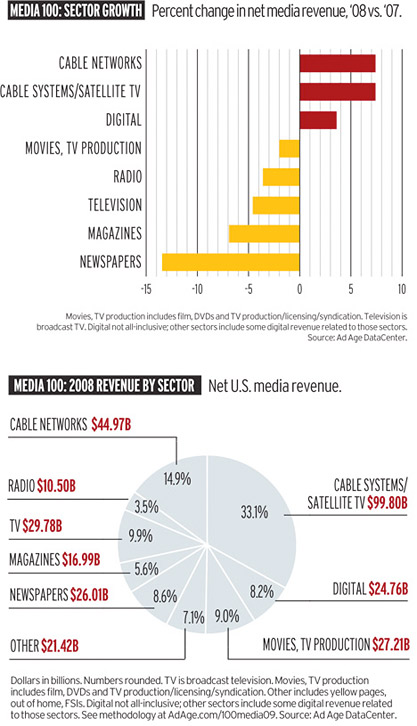