Come their fourth season, most critically venerated dramas start to chafe against the inevitable backlash. To keep things "fresh," they add and subtract actors willy-nilly, leave some plot lines untended and steer others on walkabouts, and manufacture entanglements that betray years of careful character development. They get desperate, then they get pissy and didactic about it. 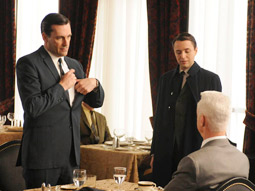 'Mad Men'
Credit:
AMC
Which is why the preemptive barn-torching at the end of season three of "Mad Men", in which the show flattened its towering twin institutions (Sterling Cooper/the Draper marriage), had such a liberating effect, certainly for viewers but likely for the show's creators as well. Much of that season was a trudge through professional upheaval and personal stagnation, a dreary meditation on longing and decay and self-loathing. After we labored through the talky slog, the final ep felt like a payoff multiplied by an emancipation with a cherry on top. Stuff, like, happened.

Thus "Mad Men" returns on Sunday night with as much of a clean slate as any middle-age drama can have at this point in its evolution. It hasn't been re-energized so much as reshuffled. The power dynamics between characters have shifted, but the show's deliberate pacing and insistence on scuffing the surface gloss remain the same. The pauses, stammers and far-off stares still say more than the dialogue itself, or serve to negate its meaning entirely. This has not been and will never be a show for the literal-minded.

Since the true joy of watching any season premiere is the sense of reintroduction and rediscovery, you won't find any spoilers here. What I can reveal without violating the terms of the blood oath demanded by AMC in order to snare a preview screener: The fourth season of "Mad Men" takes place sometime between the years of 1492 and 1976. It is set in a city, town, village or fjord-side hamlet somewhere in the Northern Hemisphere. None of the major characters has altered his accent, hair color, bone structure, ethnicity, race or gender. Really, if you want to go into this thing Frank Costanza-style, just avoid the season-four cast list -- both for who's on it and who's not.

Beyond those tasty morsels of non-spoilery manna, it gives little away to note, with great relief, that "Mad Men" returns as deliberately opaque as it has always been. Within the premiere's first half-hour, the show re-establishes its familiar elements: the simultaneous celebration and deconstruction of consumerist culture, the perils of looking back and looking forward, the innocence/ambition dichotomy. There is casual cruelty and there is monstrous parenting; there are era-accurate pop-cultural nods that you'll have to look up online, lest you feel less than completely temporally immersed.

At the same time, "Mad Men" seems new again. Owing to the slate-wiping, there's a sense that every individual and institution are adrift, that no plot turn could be too improbable (save for, say, a mass zombification). Every moment of the premiere is alive with possibility.

As with any drama that engenders such intense loyalty and devotion, there is genuine creative daring involved here. Whether or not Don Draper pressed the self-destruct button on his own meticulously configured existence, dropping him into new personal and professional environments could have sunk to the level of gimmick (e.g., "New agency. Same Don."). Instead, his displacement challenges us to reconcile what we know with the new data thrust into our grilles. We may have thought we have some idea who this guy is; we don't. If that doesn't make any sense, it will after the scene when Don [spoiler redacted] a [spoiler redacted] who [spoiler redacted] and [six spoilers and four lewd characterizations redacted].

As for Don's cohorts, be careful about reading too much into the getting-the-band-back-together vibe from the season-three finale. Don't be deceived by that low simmer on the home front, either. What's gone is gone, dude. Maybe.

Throw in one of the three best ensembles in TV history (the other two: "The Shield" and "Deadwood"), the usual evocative period detail, a novella's worth of tartly delivered Roger Sterling one-liners and a most excellent poke at this fair publication, and "Mad Men" accomplishes the nifty trick of simultaneously reinventing and staying true to itself. Four seasons in, it continues to defy expectations, spectacularly. Holy lord, I can't wait until next Sunday.