Little-Known Site Tries to Stand Out, Not Flood the Zone
READ THIS NEXT
From News Scoops to Buzzer-Beating Hoops, Live TV Continues to Deliver 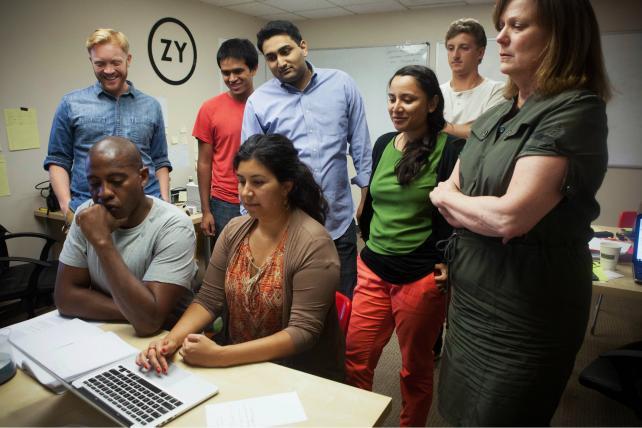 Almost every Thursday, Carlos Watson, the former MSNBC anchor who last year co-founded the news site Ozy.com with money from Silicon Valley elite, boards a transcontinental flight in San Francisco bound for New York, where he'll rise early on Friday to appear on CNN's morning show "New Day." He usually spends the rest of the day dashing around New York -- carry-on bag in tow -- going to meetings, lunches and coffee dates with a coterie of advertising and agency execs, journalists and others. That night, it's back to the Bay Area, where, in Mountain View, Ozy is headquartered.

It is about as exhausting as it sounds, Mr. Watson said. But his efforts appear to be making some headway for Ozy, which marks its first anniversary next month.

The site has entered into a content partnership with CNN that promises to raise its profile; it has hired people from prominent media companies, including, recently, Politico Chief Technology Officer Ryan Mannion; and, on Sept. 12, the site plans to introduce advertising for the first time. Deutsche Bank, Emirates airline, Hyatt's Andaz boutique hotel brand, Lufthansa, John Varvatos and Visa are among the advertisers that will begin running on the site, according to an Ozy spokeswoman.

"Flying across the country every week requires me to be really good at sleeping on planes," Mr. Watson said during one of those coffee meetings in New York this month. "But it's worth it."

Ozy -- the name is inspired by Percy Bysshe Shelley's sonnet "Ozymandias," which Mr. Watson interprets to mean "think big, but be humble" -- still has a ways to go, especially among those in New York's media-buying community. Several 20-something and 30-something staffers at one prominent media agency had never heard of Ozy when Ad Age checked. Unique visitors to Ozy.com across desktop and mobile reached 3.1 million unique visitors in July, according to Google Analytics figures it shared. That's far behind digital-media giants like The Huffington Post and BuzzFeed, which say their internal figures show their audiences are 207 million and 150 million unique visitors, respectively. It's even smaller than many magazines' websites, which might have more cash but are also bound to their print products.

"The content point of view is unclear at first glance and distribution looks to be very limited -- not a great recipe to secure ad dollars," a staffer at a media buying agency in New York said.

It doesn't help that the media world is crowded and highly competitive. The number of companies vying for ad dollars is "absolutely staggering," according to Wenda Harris Millard, president-COO of MediaLink. "It's very challenging to get the attention of these decision makers, whether it's the client or the agency," she said. "Agencies are besieged by companies they've never heard of or maybe heard of a little bit but don't know who they are. It's overwhelming for the buyers and extremely difficult for new companies to get in easily."

To all this, Mr. Watson answers with a pitch: Ozy aims to cover stories that other media outlets aren't, or at least won't for another several months. And it doesn't flood the zone with posts, but instead focuses on just a handful of stories a day. "Ozy isn't going to give you the 500th profile of Marissa Mayer, but tell you who the next Marissa Mayer is," he said. "The more you can see beyond the same 25 predictable stories, the more that matters and the more that makes a difference."

A story about a media company like Ozy would then, perhaps, fit well on Ozy. On Monday, there were profiles on both an emerging star in the Republican Party and the dog who played Toto in the "Wizard of Oz," as well as a look at Ph.D. dropouts finding success in Silicon Valley, a listicle titled "12 Surprising Ways to Use the Cow, Without Eating a Bite" and a video promising "Five Signs That Your Partner May Be Unfaithful."

Many news outlets, of course, promise to tell readers what's coming next. But Ozy's stories are also geared toward what Mr. Watson calls the age-defying "change generation" -- mostly comprised of millennials, though it could also include members of Generation X or even Baby Boomers. It's a group that "embraces things that are different," he said.

Ozy has about 50 full- and part-time employees, roughly half of which are editorial. It's just now starting to build its ad-sales team, according to Mr. Watson. The Ozy office is located among tech companies like Google and LinkedIn in Mountain View, Calif.

He declined to say how much money Ozy has raised. A Fortune magazine article from July 2013 estimated the amount at a few million, thanks to investments from Laurene Powell Jobs, widow of Apple co-founder Steve Jobs; Ron Conway, a prominent Silicon Valley angel investor; David Drummond, Google's chief legal officer; Dan Rosensweig, CEO of Chegg.com; and Axel Springer, a media company based in Germany, among others.

The site's revenue will come from a combination of advertising, live events and, down the road, a premium subscription model, according to Mr. Watson. He also suggested that getting the brand on TV could present a money-making opportunity. "We're hopeful that there will be four or five meaningful revenue streams as it becomes more mature over the next several years," he added.

Ed O'Keefe, VP-CNN Money and Politics, described Ozy as "refreshing, unique and different." It was conversations that Mr. Watson had last spring with Mr. O'Keefe that led to plans to create a series about the "next economy," Mr. O'Keefe said. Ozy also approached Havas Media, Emirates' media agency, about running ads on the site, according to Mark Gordon, senior VP-group account director at Havas Media.

"We get a lot of folks who reach out to us, multiple times per day," he said. "What drew us to Ozy is a combination of things: Emirates brand is grounded in innovation and we try to apply that to our approach to media, so we're looking for new and interesting partners."

Mr. Watson declined to say how much Ozy is charging brands to be the first advertisers on the site. Mr. Gordon, who also would not disclose what Emirates paid, said Ozy is "pricing itself as a new entrant" to the market.