Among Media, TV Is Still on Top

Time Spent on the Web Grows, but Ad Dollars and Viewers Stick With TV
READ THIS NEXT
Watch Kim Kardashian West’s ‘SNL’ commercial spoof for Skims for Thick Dogs

According to the latest research from eMarketer, advertisers are spending more than ever on the broadcast networks and cable, around $60.5 billion on commercial time this year, making TV the richest media segment, with 39.1% of all ad spending, up from 38.6% in 2010. The research firm attributes the share growth to the "recovering economy," but also found the industry is expanding at the expense of other media, specifically newspapers and magazines, and to some degree the internet. 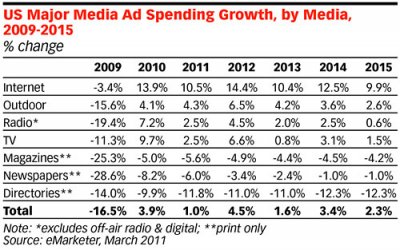 The durability and growth of TV has to come as a surprise to many who predicted that TV dollars would shift to the web along with the growing amount of time consumers spend entertaining themselves on Facebook, Hulu and YouTube.

"Even though online advertising has been robust, it hasn't stopped advertisers from keeping the bulk of their budgets right on TV," eMarketer CEO Geoff Ramsey said, pointing out that even in spite of consumers' healthy appetite for content on laptops and cellphones, it's not having any discernible effect on their TV habits, or on the amount of money marketers are looking to spend to get in front of their faces.

EMarketer estimates that $64.5 billion will be spent on TV advertising next year, almost double the amount marketers will spend on the internet. "TV remains supreme because it's still seen as a mass-reach vehicle that drives awareness," Mr. Ramsay said. But in an age of simultaneous media usage where one media often drives another and back again, it will become harder to justify discrete budgets. 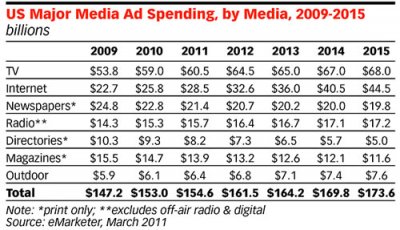 Simultaneous media consumption has become a regular habit among Americans, according to Nielsen Co. Since 2009, around 60% of the TV audience has been regularly clicking through the internet while watching their favorite shows, a fact that is more astounding when considering we're watching more TV than ever, averaging about 35 hours per week in early 2010, vs. 33 hours a week in 2009. But we're not distracting ourselves into oblivion. It turns out that people aren't watching Fox's "Glee" while checking e-mail, but they are more likely commenting on the latest episode on Twitter and Facebook while scrolling through websites such as IMDB to check a particular actor's resume or scan synopses of previous episodes.

"The internet is fueling the TV content," Mr. Ramsay said, noting how the two media have become much more blurred. And as more people adopt the practice of watching internet content on their TV screens, whether via specialized set-top boxes or even a jerry-rigged set up, it will become harder to discern where TV begins and the internet ends, Mr. Ramsay said. "We're already staring to see the semblance of this now," he said, "but TV will remain dominant for some time."