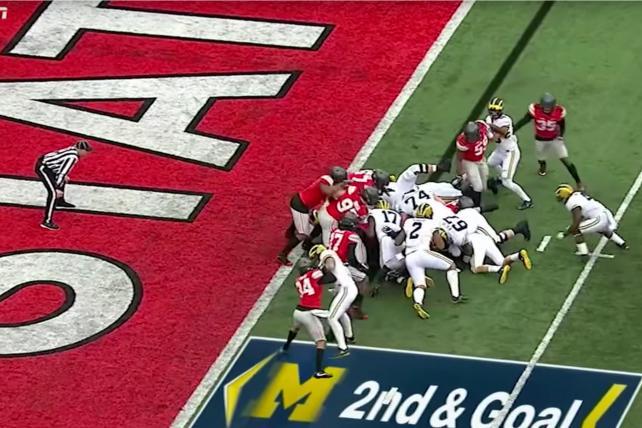 If your stadium seats more than 100,000 people, you've earned the right to indulge in a little hyperbole every now and again, so Ohio State and Michigan boosters can be forgiven for their profligate use of capital letters when referring to their schools' annual grudge match. As it happens, The Game lived up to all the advance hype -- fans are unlikely to see a more exciting college football game this year -- and the TV ratings were suitably impressive.

According to Nielsen live-plus-same-day data, ABC's coverage of the Michigan-Ohio State showdown on Saturday averaged 16.8 million viewers and a 9.4 household rating, making it the fifth most-watched regular-season college football game in the last 25 years.

The Buckeyes' 30-27 double-overtime victory now stands as the most-viewed in-season game since CBS's broadcast of the Nov. 5, 2011 defensive standoff between No. 1 LSU and No. 2 Alabama. The Tigers' 9-6 overtime win averaged 20 million viewers in primetime. (In accordance with classical precedent, the Wolverines and Buckeyes kicked off at noon EST. Don't look for The Game to migrate to primetime any time soon; Michigan only hosted its first night game five years ago.)

In terms of the rivalry, Saturday's clash was the most-watched and highest-rated meeting between the Big Ten antagonists since the so-called "Game of the Century" on Nov. 18, 2006. That year, the No. 2 Wolverines paid a visit to the top-ranked Buckeyes, only to come up short in the closing seconds. Ohio State's 42-39 win was watched by 21 million viewers, and ABC drew a 13.0 household rating.

This weekend, the College Football Playoff selection committee will convene to decide which four teams will have a shot at playing in the semifinals (Peach Bowl, Fiesta Bowl) on New Year's Eve. Currently, the top teams in contention are the undefeated Alabama Crimson Tide, Ohio State, Clemson and Washington. The latter three squads are 11-1.