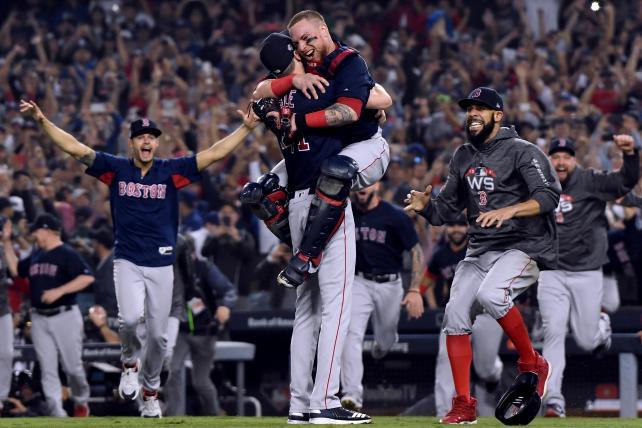 The Boston Red Sox celebrate their 5-1 win over the Los Angeles Dodgers in Game Five of the 2018 World Series.
Credit: Harry How/Getty Images

Major League Baseball on Thursday announced a number of rule changes that will impact the game in 2019 and beyond, and among them is a plan to reduce each national commercial break by 25 seconds. Trouble is, the league has yet to secure the approval of the networks.

In a statement, MLB said it would look to speed up the pace of its games by putting the squeeze on the middle-inning and between-inning ad breaks, reducing the commercial time from 2:25 per interval to an even two minutes. In a standard nine-inning game, this would erase the equivalent of 15 30-second spots from the networks' available inventory, slashing the average in-game load from 67 ads to a hair over 50.

The break-reduction scheme would shave 425 seconds off the length of each nine-frame ballgame, or a little more than 7 minutes. But the cost of keeping things moving would be dear for Fox and ESPN, which rely on the ad sales revenue to subsidize the expense of broadcasting MLB games. For example, if the skinny-pod strategy had been in place during Fox's Red Sox-Yankees showcase back on June 30, 2018, the network theoretically could have been forced to leave approximately $885,000 on the table. (That estimate, incidentally, is based on Fox's 2018 unit cost, which in the event of a reduction in available commercial spots, would only increase thanks to the concomitant decline in clutter and the quotidian supply-and-demand dynamics that hold sway over the TV marketplace.)

Per the terms of Fox's new rights deal with MLB, the network will pay an estimated annual fee of $700 million per year to the league starting with the 2022 season. Naturally, the loss of any ad revenue is less than ideal given the amount of cash the network is forking over to carry the games, but that is not to say that Fox (and ESPN and TBS) don't have options on the table.

In addition to the "double-box" or split-screen ads Fox has used to keep fans locked into the action during its "Thursday Night Football" and Nascar broadcasts, the network has made strides with augmented reality integrations with World Series presenting sponsor YouTube. Other executions that may be deployed to keep the ad dollars flowing under a shorter break structure include on-screen bugs, booth reads and special premiums. (Who among us wouldn't enjoy a "Bottom's Up with Joe Buck" promotion, in which Fox's play-by-play analyst between pitches discusses the merits of a participating beer brand with a guest celebrity/brew enthusiast? Who better to belt out "I've Got Pabst Blue Ribbon on My Mind" than Cubs fan and bon vivant Bill Murray?)

MLB Commissioner Rob Manfred believes that speeding up the game could go a long way toward winning back some of the Generation ADD crowd for whom a lifetime of digital diversions and distractions have made them allergic to baseball's lazy rhythms. And he's probably onto something.

Baseball surely could use an infusion of young blood. Per Nielsen, the median age of the audience that tuned in for October's World Series was a rather creaky 56.2 years, up from 55 years in 2017 and 53.6 years in 2016. From the advertisers' perspective, baseball remains the eldest-skewing major sport, so taking steps to accelerate the pace of a game that now clocks in at over three hours is imperative.

But for these changes to be implemented, baseball must first finalize an agreement with Fox and ESPN. According to one insider, the terms of the existing pact with MLB prohibits the league from making any unilateral changes to the ad loads. Discussions on the matter are ongoing, and while it appears that both sides will come to an agreement on the matter, no binding accord has been hashed out.

Oddly enough, commercial breaks are perhaps one of the few elements of televised baseball that are reliably paced. Long enough for a bathroom break and a run to the fridge but not so overextended that viewers begin to get antsy, the regular 2:25 intervals are arguably the most user-friendly in sports.

That said, some on-field tweaks could go a long way toward putting a little fire under the only sport that is not beholden to the dictates of the clock. A new rule that would require pitchers to face at least three batters or make it through the end of the inning would help to eliminate much of the bullpen maneuvering that make Yankees-Red Sox night games the sleep-robbing marathons they so notably are.

There is no denying that the game has been slowing down to a glacial pace, largely thanks to how today's managers tend to get precious with their pitching rotations down the stretch. Back in the 1970s, starters like Ron Guidry and Steve Carlton would pitch eight innings before the closer was called from the bullpen to put a bow on the win. Those were the days.