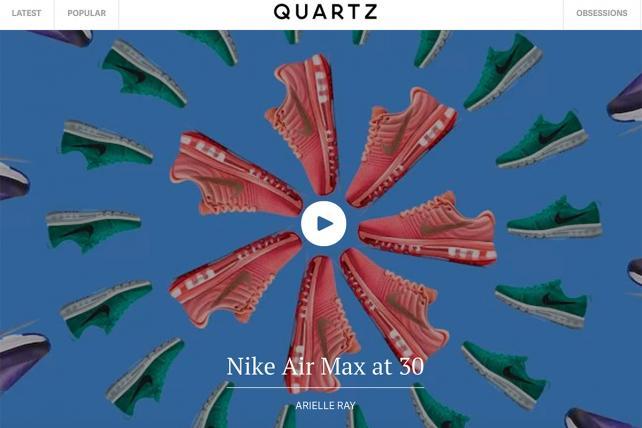 Through humor, a mobile-friendly format and distinctive reporting, business website Quartz sought to push aside stalwarts like The Economist and the Financial Times as the preferred read of global executives when it launched in 2012. Four and a half years later, the upstart has done something even more impressive for a publication financed entirely by digital advertising: It turned a profit.

In 2016, qz.com earned more than $1 million from revenue topping $30 million, a 60% spike over the previous year, Crain's New York Business (an Ad Age sibling publication) has learned from a person familiar with the company's finances.

Quartz is projecting "significantly greater revenue and profits" for this year, a company executive said, and plans to invest in further growth by adding 50 employees at its Chelsea headquarters, bringing its New York head count to around 180. The company is also looking to create new editorial products, like the interactive app it launched last year; get deeper into coverage of artificial intelligence; and expand its sales and creative services departments. An additional 18 staffers outside New York will bring the companywide staff to about 270.

It's a rare thing for media companies to make money primarily from digital advertising, which is one reason The Economist and the Financial Times have focused so heavily on building online subscription revenue. With the web's vast amount of advertising inventory, media sites have a tough time commanding higher rates. Most digital advertising dollars go to Facebook and Google, which eat up more than 80% of new online ad spending.

"Part of our mission was to show that quality journalism was sustainable online -- and to show that at a moment of real crisis and questioning by the industry," said Kevin Delaney, editor in chief and co-founder. "Our ambition is to be the business-news brand of our century."

Mr. Delaney credits parent company Atlantic Media for investing in talent from The Wall Street Journal and The Economist and setting the team loose to create a digital-only publication geared toward mobile reading and social sharing. The site never even bothered with a traditional home page.

On the business side, Quartz pioneered an oversize format for display ads and sponsored content, and a clean design suited to prestige brands that proved ahead of its time. A limit to the number of ad slots has helped keep rates high. So has the absence of banner ads, pop-ups and teasers linking to other sites.

Essential to Quartz's growth has been its focus on an elite readership, Publisher Jay Lauf said. The site had 12 million unique visitors in February in the United States, according to ComScore, compared with 55 million for Business Insider. But marketers say Quartz reaches the "right" readers. (The site, which has a big international readership, puts its global total at 20 million.) It charges an average of $65 for every thousand ad views, a rate at the top end of the market, according to media analyst Ken Doctor. Other news sites generally get a third to two-thirds of that figure, he said.

Mr. Lauf believes news organizations can compete with Facebook and Google for premium-brand advertising. "There's a lot of revenue out there for independent publishers that offer something distinctive and meaningful," he said.

The challenge for Quartz will be to continue innovating.

"They have a unique, engaged audience," said Emily Yao, a director at media buying agency MEC, whose client, Chevron, has been advertising on the site since it launched. "I've been trying to find the next Quartz but have not been able to."

A version of this article appears in the March 27 print issue of Crain's New York Business (an Ad Age sibling publication) with the headline "A risky bet finally pays off."