NEW YORK (AdAge.com) -- Apple may not have paid for its new and much-ballyhooed iPad device to be woven into a main storyline in last night's showing of "Modern Family" on ABC, but everyone is acting as if they did. 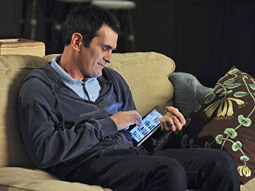 Phil Dunphy has a moment with his iPad.
Apple has been telling other media outlets it paid nothing for "Family's" bumbling Phil Dunphy character to spend the better part of the program yearning for a new Apple iPad (due out this Saturday) and even stroking the machine wistfully at show's end. And two people familiar with the situation reiterate that notion, telling us Apple and the studio that produces "Modern Family" -- News Corp's 20th Century Fox -- collaborated on its hard-to-miss cameo. Also worth noting: On Twitter, actor Jesse Tyler Ferguson, who plays Mitchell on the show, said "I will say that no 'Product' has been 'Placed' in my itchy little palm. I am excited about the iPad & will probably break down and buy one!"

ABC executives declined to comment, and spokespersons for Apple and 20th Century Fox were not able to immediately respond to inquiries.

There are reasons to believe the Apple line. The credits in last night's episode suggested that Apple simply provided the devices. What's more, the show contained no ads from Apple during its run. Many product-placement deals include the purchase of traditional advertising along with the appearance or mention of a good or service.

Apple historically doesn't pay for appearances in programming, moreover, and it may not have to. Its gadgets and computers are viewed as status symbols, even cultural icons, so it's no wonder to see shows that want to make characters seem hip -- witness the perennial appearance of an Apple laptop in HBO's "Sex and the City" -- happily weave its goods into scenes and hands.

And sometimes writers and producers come up with an idea that hinges on the mention of a particularly buzzy pop-culture item and find their efforts accommodated. Remember the appearance of a McDonald's McFlurry during last season of NBC's "30 Rock"? The burger chain told us then that it never paid for the product's in-show role, although it was contacted ahead of time and even got to make sure nothing about McDonald's would be presented in a negative light.

But if writers aren't careful, this witty comedy may look overcrowded with brands, which viewers these days assume have paid their way into storylines.

Even without Apple plunking down any cash, last night's episode was tantamount to a huge wet kiss of approval for a product that has yet to be tested by actual consumer use. And it comes after "Modern Family" has helped burnish the Toyota name, allowing its characters to drive cars from the automaker, which has suffered after some of its cars were said to accelerate unexpectedly.

ABC also missed out, of course, on a great opportunity to make some money. "Modern Family" is one of the hotter shows on network TV, a family show where many advertisers want to be seen.

A 30-second ad on "Modern Family" was valued at $130,388 this past fall, before it had even gained its current momentum with viewers. Multiply that by however many minutes of last night's episode featured shots of the iPad or scenes of the Dunphy family talking about the iPad, and, well, you might get to at least $1 million to $2 million. It's hard to believe the Walt Disney network, which saw ad revenue fall by 2.1% in 2009, according to Kantar Media, would leave that cash on the table.

But it worked -- at least for Apple and probably for the episode -- even if viewers think it was paid. Whether or not Apple actually exchanged wampum with ABC or 20th Century Fox for its iPad to show up in a new and beloved sitcom is mostly academic.