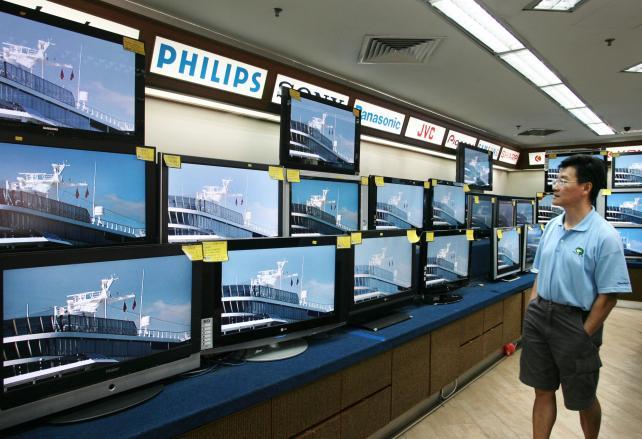 TV ad sales in the U.S. fell 7.8 percent to $61.8 billion last year, the steepest drop outside of a recession in at least 20 years, while sales at cable networks slumped for the first time in almost a decade. And there's no sign of a pickup in 2018, excluding cyclical events like the Olympics and the midterm elections, according to data from Magna Global.

The decline in TV viewership is accelerating as online rivals Google and Facebook have increased their investments in video, capturing almost every new advertising dollar entering the marketplace. TV ad sales have fallen even as global advertising grows, leading research firms and analysts to predict that the business may not return to growth.

"In a healthy economy, we're looking at no growth in advertising from traditional media companies,'' said Michael Nathanson, an analyst with research firm MoffettNathanson. "That's a worrying trend.''

Media companies have relied on TV advertising dollars for more than 60 years, using money from commercials and sponsors to fund variety shows, sitcoms, dramas and news-gathering. Advertising constitutes about 41 percent of revenue at CBS Corp., owner of the most-watched TV network in the U.S., and almost 30 percent at Fox.

For most of the past two decades, the TV business has fought off competition from technology giants, weathering the threat better than peers in publishing and the record business. Even as viewership has fallen, media companies have managed to extract higher ad rates. The spot for a 30-second commercial in the Super Bowl, for example, has more than doubled in the past 20 years.

Yet TV is finally succumbing to the forces that have weakened its other media brethren. The number of people paying for live TV has declined for several quarters. Super Bowl ad prices may have hit a plateau. And advertisers are following the customer online, where social networks and streaming services command more and more of people's time. Some of those rivals, like Facebook and YouTube, sell ads. Others, including Netflix, do not.

The effect has been widespread. Viewership of all four broadcast networks slipped by more than 10 percent last year among people age 18 to 49, the demographic most important to advertisers, according to MoffettNathanson. Cable networks, which once stole viewers from broadcast, are also suffering.

Live sports events, which had been immune to the declines afflicting general entertainment programming, are also losing viewers. Ratings for the National Football League, the most-watched programming on TV, have fallen for two years in a row.

The decline robs media companies of eyeballs to sell to advertisers still hungry for live audiences. And TV networks with fewer ads to sell are also facing a revolt from some of their biggest advertisers.

Pharmaceutical companies, movie studios and automakers have all slowed their spending on TV advertising. Spending by all three groups, among TV's most important sponsors, dropped by double digits—even as their businesses slumped by far less.

"The peak of the TV ad market was two years ago,'' says Michael Leszega, manager of market intelligence at Magna Global.

No one is predicting the demise of TV advertising, but even media companies concede that sales at traditional networks may never reclaim their old highs. Instead, they must capture a larger share of marketing dollars being spent on the internet.

Fox, CBS, Disney and others are all developing new online video services, some of which offer advertising. Hulu, owned by a consortium of media giants, now generates more than $1 billion in advertising each year.

Networks are also developing data tools to offer advertisers the best of the web—superb targeting of individual viewers—with what they do best, high-end TV. Fox, Turner and Viacom have teamed up for a consortium called OpenAP, and are working to sign up other media companies.

"Facebook and Google are cleaning our clocks because they have targeting,'' said Peter Rice, head of Fox's TV networks group. "I don't think the advertising product is as good,'' adding that TV will take a bigger slice of ad sales as it implements better targeting.

Media companies have tried to use Facebook's admission of poor audience accounting and the proliferation of inappropriate content on both Facebook and YouTube to persuade advertisers to slow spending online. A few diverted spending to TV from digital in recent years, but no scandal has slowed the growth in advertising sales at Facebook or Alphabet.

"TV doesn't have fraud or viewability problems, but the prices are just so high now,'' Leszega said. "We're at a tipping point.''