How Movie Marketing Has to Change if Studios Want 'Premium VOD'

Studios' plans to test "Premium VOD" -- which would let you watch new releases at home as soon as 60 days after they arrived in theaters -- has theater owners predictably upset, but that's not the only hurdle for the idea. If studios want the on-demand window to start sooner, they have to change the way they advertise movies.

Theater owners, of course, present the first big challenge to the plan, which directly threatens their business. In recent days some chains have threatened to not run any movies that will be available 60 days after release, because it's only after the first month or so that the split in ticket prices begins to favor the theaters. Others have also said they won't even run trailers for these movies.

There's also the initial price set for this experiment, $30 a title, which is hard to imagine the marketplace supporting. If a movie wasn't exciting enough to separate you from $10 at the theater, it strains credulity that you'll leap to shell out $30 at home -- especially when waiting just another few weeks means you can get it from Redbox for a buck or Netflix for an imperceptible percentage of your subscription fee. And it's hard to see people who aren't buying movies for $20 finding value in renting them for more than $10, regardless of release timing. 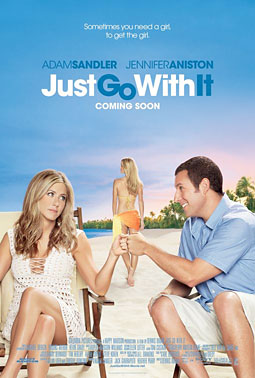 'Just Go With It' is reportedly one of the first films that will be available as a $30 early VOD offering.

Assuming that $30 is just a trial balloon and that the price winds up coming down to something more realistic, however, the studios could very well be on to something here -- much the same way that TV networks were ultimately successful with their own online offerings. A platform such as Hulu, though, has simultaneously complicated life for its creators, partly because it doesn't seem that anyone actually planned for the possibility that it might succeed. If Premium VOD is going to works, studios should plan for the likelihood that it fundamentally changes the way movies are marketed.

Right now most movie campaigns are based on the getting people to turn out for a specific action on a specific day. For that reason they're more often compared to political advertising than campaigns for consumer products -- which have launches, of course, but which are going to be just as available at Target in six months as they are now. But if movies are increasingly becoming available for everyone wherever they are and whenever they want to see them, the marketing will have to reflect that reality as well. It becomes more worthwhile, for example, to deploy targeted online ads aimed at niches that might be interested in smaller releases, films that wouldn't traditionally receive much marketing support.

And the campaigns need to be extended.

While theaters can threaten -- and may actually execute on -- plans to cut or kill their marketing support for films headed to Premium VOD, the studios themselves will need to market those release schedules with every bit as much enthusiasm and fervor as they once reserved for opening weekend. Otherwise this experiment will die on the vine every bit as quickly as the one with those disposable DVDs where the content expired after 48 hours.

If there's a wild card in all this it's the TV networks. They may be more than happy to continue taking studio advertising dollars, which have pretty consistently been flowing their way even when other ad categories sank. But networks may also feel that their core business is as threatened by this rush to the small screen as it was by the introduction of home video itself. If networks decide to somehow strong-arm studio media buyers -- maybe charging a premium ad rate for movies that will hit VOD quickly -- studios could decide they're under fire from too many directions and end their experiment of their own volition.

Whether this particular experiment proves successful, it's clear that the future, in some manner, includes the audience's ability to watch a movie in its own environment and on its own schedule. Movie marketing efforts will eventually have to support that, changing their tone, scope and direction as that change occurs.

ABOUT THE AUTHOR
Chris Thilk writes and publishes MovieMarketingMadness.com and is a supervisor at PR and marketing agency Voce Communications.