MTV Comes Up With Its Latest 'Jersey Shore' Spinoff

MTV just can't seem to get enough of "Jersey Shore."

While the fun at Seaside Heights is ending this season, its legacy will live on with yet another spin-off: "The Show With Vinny," in which Vinny Guadagnino will interview celebrities from the kitchen table in his Staten Island home. 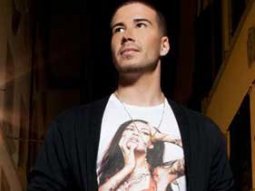 "Celebrities will let their guard down to have a meal and a candid conversation about whatever comes up, complete with lots of commentary from Vinny's peanut gallery of loved ones," MTV said as it announced the show. "No studio or audience; just family, food and big friggin' stars."

MTV has already been trying to extend the "Jersey Shore" franchise with two other spinoffs, "The Pauly D Project" and "Snooki & JWoww." But neither has been able to garner the same ratings or buzz as the original. "Snooki & JWoww" has been picked up for a second season, which will premiere Jan. 8, but there's been no word on Pauly D's show.

"Jersey Shore" saw a 40% plunge in ratings when its final season premiered in October, compared with the previous season opener. It has averaged 3.3 million viewers for the season, significantly below its peak of 9 million or the 5 million viewers that watched the Season 5 finale. The show's final episode is scheduled for next month.

MTV described "The Show With Vinny" one day after naming Susanne Daniels as president of programming. Ms. Daniels, who is best known for heading programming at the WB, will replace David Janollari, whose contract was set to expire.

Ms. Daniels joins the network as it turns its focus toward beefing up its scripted programming with series such as "The Inbetweeners" and "Underemployed."