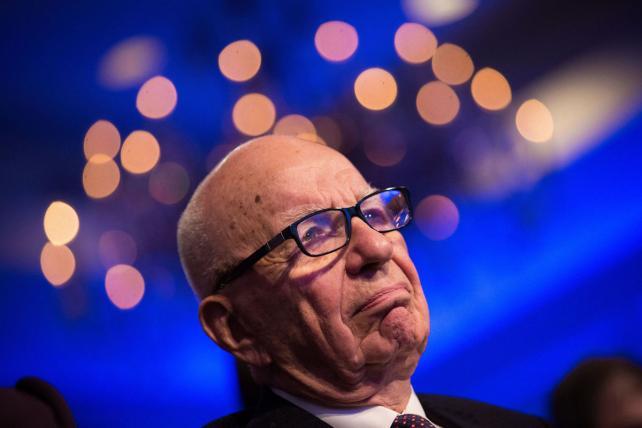 Rupert Murdoch's 21st Century Fox has agreed to sell its pay-TV businesses in Italy and Germany for more than $9 billion, gaining funds it could use to raise an $80 billion takeover bid for Time Warner.

British Sky Broadcasting Group, which is 39% owned by Fox, will pay 2.9 billion pounds ($4.9 billion) in cash for Fox's 57.4% stake in Sky Deutschland, the England-based BSkyB said today. BSkyB will use 2.07 billion pounds in cash and a stake in National Geographic Channel to pay for 100% of Sky Italia.

The deal will give Murdoch ammunition as the 83-year-old weighs how much he can increase an $85-a-share bid for Time Warner without jeopardizing Fox's investment-grade credit rating and increasing its borrowing costs. BSkyB gains leverage, becoming a European satellite and cable service with 20 million subscribers, as it negotiates for rights to sports and entertainment.

Bloomberg News first reported BSkyB's talks with Fox on May 9, and on July 20 said that Murdoch was considering using proceeds from the asset sales to increase his offer for Time Warner, owner of CNN, HBO and the Warner Bros. studios.

"This deal makes a lot of sense," said Carlo Alberto Carnevale Maffe, a business professor at Milan's Bocconi University. "Broadcasters must now compete in scale, scope and technology integration against new business models such as Netflix."

'Old dream'
"The deal is also great for Murdoch since now he can keep on pursuing the Time Warner deal and fulfill his old dream of becoming the single entrepreneur in the global media industry with the largest content breadth and depth," he said.

The deal provides Murdoch's Fox empire with a way to obtain cash and at the same time maintain a grip on European pay-TV assets within BSkyB, while pressing ahead with efforts to buy Time Warner.

The deal leaves Fox with cable and broadcast networks plus movie and TV studios, making the company more attractive to investors who want to bet on video production, rather than distribution. In a statement, Fox said it plans to renew its share-buyback program, without detailing how it plans to use the $7.2 billion after-tax proceeds it expects to receive.

An eventual takeover of Time Warner would reshape the media industry by giving the TV-and-film companies bargaining power in negotiations with cable operators such as Comcast Corp. and Time Warner Cable Inc., which are in the process of their own merger.

News split
Murdoch and his son James, who was BSkyB's chief executive officer from 2003 to 2007, had for years considered combining the European operations. A full takeover bid by Murdoch for BSkyB was derailed in 2011 over the phone-hacking scandal at News Corp., his publishing empire. Last year, Fox and News Corp. were split into separate publicly traded companies, with the Murdoch family maintaining large voting shares in both.

Murdoch's $85-a-share cash-and-stock bid valued New York- based Time Warner at about $75 billion, excluding options that could raise the total equity value to $80 billion. Each dollar a share that Murdoch raises his bid costs by almost $1 billion.

BSkyB said its 21% stake in National Geographic Channel, as part of the payment for Sky Italia, is valued at 382 million pounds.

"The three Sky businesses complement each other well and will be stronger together," BSkyB CEO Jeremy Darroch said on a conference call. The transaction will probably be completed by the end of October or early November, he said.

Content wars
BSkyB, which spends about 2 billion pounds a year on content, this week bought a 70% stake in the U.K.'s Love Productions, producer of "Great British Bake-off" and TV documentaries such as "Benefits Street." BSkyB last week sold a minority stake in ITV, the U.K.'s biggest commercial broadcaster with top-rated shows such as "Downton Abbey," to Liberty Global for 481 million pounds.

Sky Italia, which serves about 4.8 million paying households, is adding terrestrial channels to complete its offerings via satellite and high-speed broadband networks. Sky Deutschland, with about 3.7 million customers, is the smallest and fastest-growing of the three companies as it broke into a market dominated by free-to-air broadcasters.