Public Reports of Bid for Time Warner Were Not an Accident 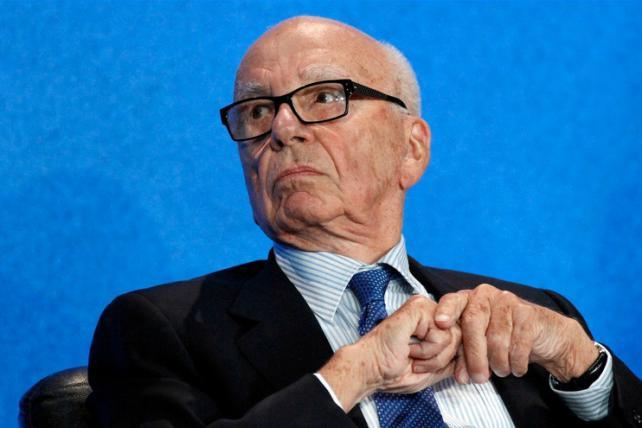 It's the strategy Rupert Murdoch has employed in his effort to acquire Time Warner, and similar to one that proved successful in the billionaire's last big, surprising media takeover.

In 2007, when News Corp. was pursuing Wall Street Journal publisher Dow Jones -- which it eventually won for more than $5 billion -- Mr. Murdoch made a private approach to a reluctant target. Then, a leak helped Murdoch pressure the Dow Jones board to strike a deal.

Now, Mr. Murdoch's 21st Century Fox is trying to acquire Time Warner, the owner of HBO, CNN and Warner Bros. for more than $75 billion. After an early bid was rejected, Fox's side helped leak its offer, according to people with knowledge of the matter, luring arbitragers who want a deal struck.

The deliberate leak is an approach used by other dealmakers as they seek to build shareholder pressure against a target, and Mr. Murdoch and his senior team will wait to see if the same happens to Time Warner, one person said.

"It's the modus operandi that Murdoch has used, not just for Dow Jones, but lots of other deals," said Porter Bibb, managing partner at New York-based Mediatech Capital Partners, a private merchant bank specializing in media and technology that also advises on deals. "He's better at it than a lot of other people who are much more sophisticated dealmakers because he has such a clear understanding of the impact media exposure gives his efforts."

In the four trading days since, more than 14% of Time Warner's 882 million shares changed hands, data compiled by Bloomberg show.

Julie Henderson, a spokeswoman for Fox, declined to comment on the strategy. Keith Cocozza, a spokesman for Time Warner, didn't respond to requests for comment.

Planned leak
The plan was put in motion on June 9 when Fox President Chase Carey proposed the deal to Time Warner CEO Jeff Bewkes over lunch in New York, people familiar with the matter said earlier this month. Mr. Bewkes rejected the bid in a letter to Mr. Murdoch on July 8.

After various news outlets caught wind that Time Warner was a target -- Fox Business News's Charlie Gasparino tweeted the next day that the company was drawing interest from Google -- Mr. Murdoch and the team at Fox decided to get the full details out, the people said, asking not to be identified discussing private information.

Around 7 a.m. on July 16, Andrew Ross Sorkin, who also had been chasing the story, reported the specifics of Fox's offer. He had the price at $85 a share and the structure, reporting it on the air at CNBC as well as the website of the New York Times.

Rule change
Until yesterday, shareholders with just 15% of Time Warner stock could call a special meeting to replace much of the board in February, said a person familiar with the matter. With so much of its shares having turned over, Time Warner changed its by-laws to eliminate that provision, at least until its next annual meeting in June 2015, the person said.

With that option off the table, Fox will have to build a larger block of shareholders to press the board to begin talks. The by-law change was not anticipated by Mr. Murdoch's team, said a person familiar with the matter. The hope there is the move will backfire and prompt new and longer-term holders to go public in support of the bid, the person added.

Arbitragers -- mostly small hedge funds that bet on mergers and acquisitions -- have poured in. More than 120 million Time Warner shares have closed at an average of $86 per share since the news broke, data compiled by Bloomberg show.

'Exciting' deal
"People who are conservative can unload the stock because there's probably a line around the block of hedge funds and risk arbs that are willing to take the risk," said Charlie Murphy, a professor of investment banking at New York University's Stern School of Business. "There's a lot of demand out there because it's a really exciting deal."

The waiting strategem doesn't require the shareholder base to turn over entirely. What matters is that there are enough new holders wanting the company to be sold that the board can't ignore them. Many won't have an opinion on Time Warner or Mr. Bewkes's argument for independence. Rather, they've bought the company's shares at an elevated level, and don't want to lose money if the target isn't sold.

While Fox encourages the new shareholders to back its bid, the company and its advisers -- a group that includes JPMorgan Chase & Co., Centerview Partners and law firm Skadden Arps Slate Meagher & Flom, which were all on board for the Dow Jones pursuit -- will also work to convince longer-term investors that a combination could benefit them too. Fox has estimated it could cut more than $1 billion out of both companies' costs once they're combined, a person with knowledge of the matter said last week.

Journal echoes
Mr. Murdoch's bid for Dow Jones was first reported by CNBC reporter David Faber. Who leaked it is not clear, according to "War at the Wall Street Journal: Inside the Struggle to Control an American Business Empire," a book by Sarah Ellison that chronicles the deal.

The book does indicate Mr. Murdoch and others at News Corp. e-mailed and spoke openly with Wall Street Journal editors and others about the private bid. Public disclosure of the bid added pressure to Bancroft family members, some of whom backed a sale to Murdoch, according to Ms. Ellison.

Though it's 15 times the size of Dow Jones, Time Warner may be an easier target -- even after its move to strengthen the company's defense -- because it doesn't have a block of controlling shares owned by a single family. In Dow Jones's case, a dual-class voting structure gave the Bancroft family more than 64% of Dow Jones voting rights.

After three months of pressure -- including public scrutiny of Dow Jones's tepid performance as a public company -- a majority of the family voted to support the Murdoch takeover.