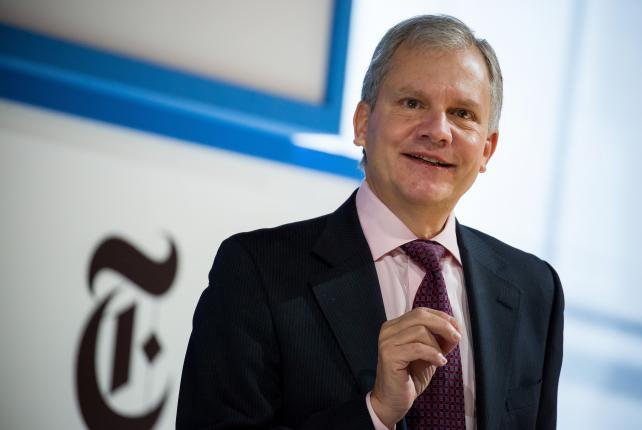 The New York Times, seeking to amass more paid subscriptions in an era of non-stop, must-read headlines, is halving the number of articles available for free on digital platforms each month.

Starting Friday, most non-subscribers will only be able to read five articles rather than 10 before they're asked to start paying. It's the first change to the paywall in five years. A basic Times subscription, with unlimited access to the website and all news apps, is $15 every four weeks.

Scoops on the Trump administration's scandals and sexual-harassment allegations in Hollywood have already contributed to a surge in Times subscriptions, which jumped 60 percent in September from a year earlier to 2.5 million. With demand for journalism "at an all-time high," the Times decided this was the right moment to experiment with giving away less online content for free, says Meredith Kopit Levien, The New York Times Co.'s executive VP and chief operating officer.

"It's a very hot news cycle," Levien says. "We think it's as good conditions as any to demonstrate to people that high-quality journalism is something to be paid for."

As Facebook and Google capture a growing share of the online advertising market, publishers from the New York Times to Conde Nast are trying to shift their digital businesses from selling ads to persuading readers to pay for their journalism.

Fueled in part by demand for news about President Donald Trump, the Times' subscription business has thrived in the past year. The Times added 154,000 digital-only subscriptions last quarter, a 14 percent increase in new customers from a year earlier, though many signed up through promotional deals and may leave when regular rates kick in.

The subscriber boost has led to a surge in Times Co. shares, which are up 41 percent this year.

But enticing casual readers to open their wallets raises a tricky question: Just how many free articles do you let them sample before requiring them to sign up?

The decision comes with trade-offs. By reducing the number of free articles, the Times will likely see a drop in traffic at the website, which could hurt ad revenue.

Levien said that tightening the Times' paywall would have a "modest impact" on its digital advertising business, which increased 11 percent last quarter from a year earlier. The increase failed to offset the continued decline in print ad sales, which fell 20 percent.

The potential decline in traffic is worth the risk, she said, if it leads to more people signing up. And most of the Times' web visitors are already paying digital subscribers, she said.

Other publishers have experimented recently with tightening their paywalls. The Boston Globe in May reduced its number of free articles to two from five, leading to a surge of new subscribers. The Washington Post tested requiring readers to enter their email address and sign up for its daily newsletter to keep reading articles for free.

The Wall Street Journal started blocking Google users from reading free articles in February, boosting paying customers while causing a decline in web traffic from the search engine. Google has since announced it will end its policy that required subscription-based publishers to offer a few free articles a day through its search engine.

Since last June, the Times has limited the number of free articles for readers who arrive via social media, which contributed to its subscriber gains. Previously, articles read via Facebook or Twitter didn't count toward the paywall.

The Times may eventually offer a different number of free articles to non-subscribers based on how they arrive or their reading habits.

The publisher has struck deals with other media companies to sweeten the offer of a digital subscription. Earlier this year, for instance, the Times began working with Spotify to give new paying digital customers subscribers free access to the music-streaming service.