Decision Reflects No Doubts About Publishing or Hacking Fallout, According to CEO
READ THIS NEXT
TV's most expensive shows for advertisers this season

News Corp.'s board has decided to pursue a division of the company's vast operations into one spinoff focused on entertainment and another focused on publishing, the company said Thursday. But the decision has nothing to do with any doubts about the newspaper business or fallout from its phone-hacking scandal in Britain, News Corp. Chairman and CEO Rupert Murdoch said. 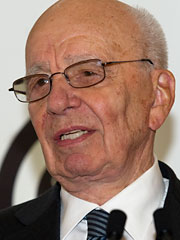 "Today is really a very exciting day at News Corp., and one of great pride for me personally, I must say, as we move toward our next transformative phase of our history," Mr. Murdoch said during a conference call with analysts and reporters Thursday morning.

That was perhaps a deliberate inversion of Mr. Murdoch's remarks last summer when he appeared before a Parliamentary committee investigating the hacking scandal, an occasion he called "the most humble day of my life."

"Naysayers" will see the separation as a sign of "concern about the future of publishing," Mr. Murdoch said on the call Thursday. "That could not be further from the truth."

Instead the split will allow the publishing division to better display its strengths and focus on its particular priorities, which can "sometimes be obscured within our current structure," he said.

"The opportunity is so big that a single-minded pursuit is the best approach," Mr. Murdoch added.

Nor was the decision related to the hacking imbroglio, Mr. Murdoch said. Outrage over the scandal, particularly the hacking into the voicemail of a missing teenage girl who was later found murdered, led News Corp. to shut down the News of the World and abandon its effort to gain full control of British Sky Broadcasting.

"We're not doing this in any way as a reaction to anything in Britain," Mr. Murdoch said.

Nomura analyst Michael Nathanson -- who called the entertainment spinoff "Good NWS" in a note this week and the publishing spinoff "Bad NWS" - asked why the move came now.

"I've seen other companies split up that have split up and certainly done very well for their shareholders from it," Mr. Murdoch answered.

BTIG analyst Richard Greenfield told Mr. Murdoch he believes publishing is in long-term decline. "Why are you so confident you're going to be able to grow profitability?" he asked.

"The answer is one word: digital," Mr. Murdoch replied. "People are buying pure papers printed on pressed wood but they are equally getting their news in many other forms."

"As the world gets more complicated," he added, "people need to know what's going on."

Assuming the split is completed as planned, a process that News Corp. said would take about a year and remains subject to final board and shareholder approval, Mr. Murdoch will become chairman of both spinoffs. Chase Carey, president and chief operating officer at News Corp., will serve as president and chief operating officer at the entertainment spinoff. But News Corp. has not identified someone to lead the less-glamorous publishing company.

"We have a wonderful group of managers in the whole company, the whole of News Corp., to choose from," Mr. Murdoch said.