In an unprecedented public gathering of the heads of the nation's top sports leagues, NBA Commissioner Adam Silver on Tuesday made a bold prediction about a topic his colleagues would just as soon sweep under the nearest rug: He believes sports gambling will be legalized in the United States.

Speaking at the Paley Center for Media's "GameChangers" panel, Silver said he thinks the laws that keep sports books quarantined in Nevada and three other states eventually will fall by the wayside.

"My sense is that the law will change in the next few years in the United States, and I think it's not as much a matter of our leagues being for or against sports betting, it's more a function of being realists," Silver said. "It's a multi-hundred-billion-dollar illegal industry … and I think ultimately, as the owners of our intellectual property, we're going to embrace it and also make sure that our integrity is protected at the same time."

Silver, who in 1988 earned a degree from the University of Chicago Law School, said that recent events would seem to suggest that the legalization of sports betting may be in the offing. He specifically noted that the U.S. Supreme Court last month agreed to hear New Jersey's appeal in its long-running quest to offer legal sports wagering throughout the Garden State. (Other states that are now setting up their own provisional legislation in the hopes New Jersey gets the five votes it needs to proceed with its gambling vision include New York, Connecticut, Michigan and Maryland.)

While the prospect of the NBA wetting its beak in what is now a wildly lucrative, wholly unregulated economy is likely a contributing factor in Silver's advocacy for legalizing sports gambling, the commish said the practice also does wonders for fan engagement. Citing data the NBA receives from bookmakers that take action on its games in Europe, Silver revealed that 85% of pro hoops bets are "in-play." In other words, rather than simply betting the point spread and then sitting back and watching the game unfold, European bettors are wagering on a constant stream of variables: free throws, quarter scores, three-point shots and every other data point you can think of.

"Independent of whatever revenue stream that may result from licensing our intellectual property to those gaming companies, [gambling] results in enormous additional engagement in fans," Silver said. And say what you will about the moral pitfalls of gambling, but it sure can make what might otherwise be an uninspiring game into a real nail-biter. "You might have a sports fan who's turning off a contest because the game is out of reach for their team or it's a blowout, but here there's a completely independent reason to continue watching," Silver said.

Silver first began vocalizing his support of legalized sports betting in a 2014 editorial that was published in The New York Times. In that piece, Silver encouraged the federal government to allow states to offer a highly regulated form of legitimate wagering, one that would include minimum-age verification and the monitoring of any unusual activity in the betting lines that might indicate the outcome of a game was being manipulated by outside interests.

Silver's colleagues on the dais offered more ambivalent responses to the idea of legalized sports gambling. NHL Commissioner Gary Bettman said that because most people don't bet on hockey, the propsect of legalized gambling isn't exactly a pressing issue for his league.

"We're a small part of the betting that goes on. Football, basketball, both at the pro and college levels, is where, I don't know, 98% of the betting goes on," Bettman said, before adding that he had some reservations about how legalization could impact the culture of the sport.

"I don't worry about fixing games, I don't worry about anything other than what does [gambling] do to the way young people consume sports," Bettman said. "Do they look at it as a vehicle for healthy competition with role models or do they look at it as a device to make or lose money on a bet? And secondly, what will it do to the environment, in a stadium or in an arena, if everybody is sitting there just worried about their bets? Does it turn us into something other than what we've been, more like either a racetrack or a jai alai fronton?"

MLB Commissioner Rob Manfred suggested that legalized gambling would likely serve to intensify the fan experience in the same way DraftKings and FanDuel have demonstrated in recent years. "We were pretty comfortable with the idea that [daily fantasy] was a game of skill and therefore legal, and that's why we became involved in it, and obviously it's a source of fan engagement," Manfred said. "And then you get into actual sports betting, and it seems to me that there's a difference between somebody betting on whether the next pitch is going to be a ball or a strike, which is very hard for anybody to affect or control, as opposed to the outcome of a game, which is a little different." 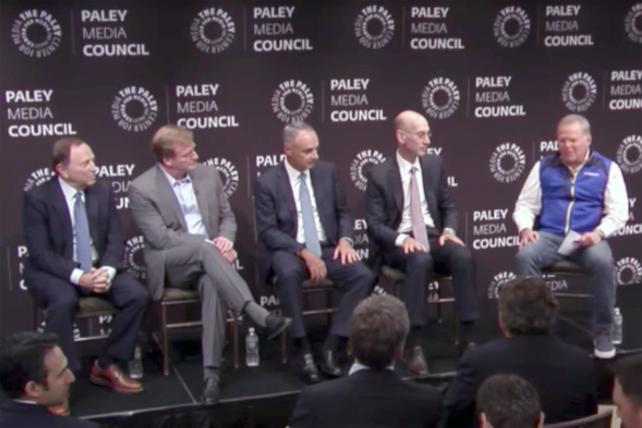 NFL Commissioner Roger Goodell was conspicuously silent on the subject, speaking up only once during the gambling portion of the conversation to say he agreed with Manfred's assessment that wagering on point-spreads is obviously a knottier issue than placing micro-bets on pitching counts and other in-game ephemera.

Of course, Goodell and the 32 NFL owners will have plenty of time to mull over the implications of legalized gambling as the Oakland Raiders begin making preliminary plans to shift their base of operations to Las Vegas. The Raiders are expected to move into temporary desert digs in 2019, or just two years after the NHL's expansion team, the Las Vegas Golden Knights, begins repping Sin City this fall. Top-tier sports leagues have had a long-standing aversion to setting up a franchise in Vegas, given the relative ease in which players and officials might be compromised by rubbing elbows with shadowy figures from the underworld. While perhaps not an entirely unwarranted assumption, the anti-Vegas bias never quite managed to explain away why so many pro teams are based in similarly, well, active metropolitan centers such as New York, Northern New Jersey, Boston, Chicago, etc.

The four league bosses addressed a number of other issues during the course of the hour, including the rise of eSports, the rapidly evolving media landscape and how culture is changing the nature of fandom. Each commish was enthusiastic about the emerging eSports marketplace. Silver said the upcoming rollout of the NBA 2K eSports league would serve as a means to promote the game while "developing new content and appearing to a new audience," while Manfred said the MLB "can learn a lot from the demographics of the people who are engaging in this activity."

Bettman joked, however, that the outsized popularity of the pro-videogame hustle was a bit bewildering. "Maybe it's a generational thing, but I don't get tens of thousands of people going to an arena to watch eSports," Bettman said. "But they do it, and we have to make sure we are relevant in all ways possible to young people who are having to choose how they spend their leisure time."

Goodell went on to say that the impact of fantasy sports, if not traditional gambling, continues to make itself manifest in the NFL's Nielsen ratings. "We see it with our television partners; even if your team is out of it, you're going to watch," Goodell said. "It does potentially have a little bit of a negative view—do they still have the same loyalty to a team they once had? But they used to turn the television set off. Now they're not."

Speaking of ratings, the NFL boss said that the commercial-free RedZone channel "is thankfully not having any effect on our broadcast audience," which is likely a function of its relatively small footprint. It goes without saying that a fully distributed RedZone channel would be a nightmare for advertisers; as Ad Age demonstrated two years ago, a fan who watches all the Sunday NFL games via the ad-free service will have avoided 38 hours and 45 seconds in commercials over the course of the regular season.

If fantasy and gambling go a long way toward reinforcing fan engagement with live sports, lightening the commercial load may also help keep viewers from bowing out during the breaks. As Goodell positioned it, the NFL's decision to trim a few pods from its 2017 broadcasts is part of an ongoing effort to stop giving fans "a reason to turn the channel, or to locate another device." Goodell added that the league would continue to weed out the sort of "dead time" that can make an NFL broadcast stretch well past the three-hour mark.

"Nobody really wants to watch officials running around, figuring out what's going on—they want to watch action," Goodell said. "That's the critical component. How do we make [the games] better and don't give the fan the opportunity to turn the channel?"

If there was a moment when the commissioners acknowledged that the future of sports may be a lot more uncertain than anyone might care to admit, it arrived when the conversation turned to the youngest enthusiasts.

"For all of us, the next generation is different in terms of the way they think about sports," Manfred said. "They don't play sports as much as we did, and you know, the best way to get a fan is to get a kid to play, and so that's a challenge."

The meteoric rise of gaming, social-media and streaming video has played a rather unambiguous role in the development of this less-than-sporty generation, but it's not as if anyone's ever getting that ribbon of toothpaste back in the tube. As much as Goodell was emphatic in asserting that the leagues have to be willing to risk a little self-cannibalization in the service of the fan, the irony of the NFL and the other sports orgs putting so much stock into an emerging market that's leading kids away from the more static pleasures of live sports viewing is hard to overlook.

"One of the problems we all face as an industry is that kids are playing less sports and are, in fact, playing one sport and specializing in that on a year-round basis," Goodell said. "I don't think there's anything worse than that."