With the Warriors on Fire, NBA Generates Big Bucks for TNT, ESPN

As Season Heats Up, a Torrent of Booze and Movie Dollars Floods the Zone 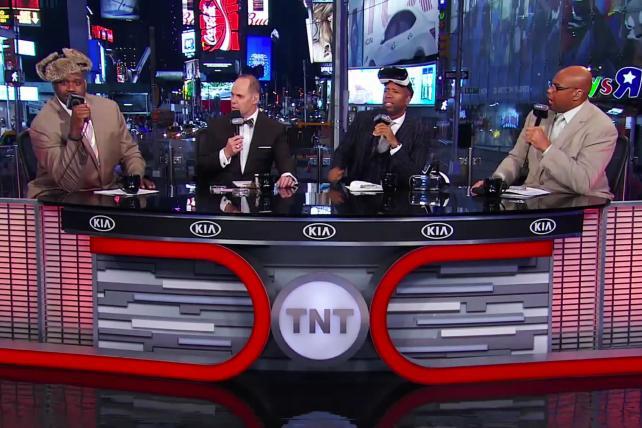 The Warriors are giving TNT and advertisers a story to get excited about.
Credit: TNT/Turner Broadcasting

The Golden State Warriors' seeming unwillingness to lose has been a boon to the NBA's TV partners, and as the defending NBA champs' historic run continues into December, ratings points and ad dollars are piling high.

Last week's Warriors-Lakers blowout on TNT delivered 2.72 million viewers and a 1.8 household rating, making it the fifth most-watched NBA game of the 2015-16 season. Since beginning their title defense in late October, the Warriors have played in six of the top seven nationally televised NBA games; only TNT's season-opening Cavs-Bulls showdown on Oct. 27 has put up bigger numbers (3.5 million viewers, 2.1 household rating).

With a little under a quarter of their regular-season games in the bag, Steph Curry and Co. are now a mind-boggling 20-0, a perfect mark that tops that of any franchise in any sport. There's a joyfulness to this team that is almost infectious, and the Warriors' unrivaled success appears to be having a salubrious effect on the NBA as a whole.

According to iSpot.tv estimates, NBA games on ESPN and TNT have generated $128.4 million in ad sales revenue since the season began. And while some of TNT's upcoming prime-time telecasts will be shut down in observance of the holidays (Christmas Eve and New Year's Eve fall on successive Thursdays), through the first five weeks of the season the Turner net is out-earning ESPN in basketball.

The "NBA on TNT" games thus far have raked in some $77.4 million in ad sales, per iSpot.tv, which notes that the usual suspects (auto, quick-serve restaurants, telco, movies, insurance, video games, financial services) are responsible for the vast majority of those in-game buys. Geico ($3.13 million) is currently the top spender in TNT's NBA coverage, followed by Kia ($2.91 million), Activision's "Call of Duty: Black Ops III" ($2.77 million), Samsung ($2.73 million) and Columbia Pictures. The studio has invested some $2.53 million to promote its James Bond film "Spectre" and the Seth Rogan holiday flick "The Night Before" on TNT's pro hoops showcase.

Hard liquor is maintaining a high profile on TNT, as the top five booze spenders Bacardi, Belvedere, Jose Cuervo, Jim Beam and 1800 Tequila have combined for $4.19 million of in-game spend. Meanwhile, the embattled Daily Fantasy Sports category's mania for all things NFL has not translated to a big payday for the NBA's media partners. Season-to-date, DraftKings hasn't spent a dime on TNT's NBA package, while FanDuel has dipped a toe in with a 15-spot buy valued by iSpot.tv at $593,046.

ESPN has a much cozier relationship with DraftKings, which is apparent upon examination of the daily fantasy sports brand's NBA spend. Through the first five weeks of the season, DraftKings has plunked down $585,430 for 15 in-game spots on ESPN, while FanDuel ads have aired just three times, to the tune of $118,535.

ESPN's NBA games have taken in around $49.3 million in ad sales; top spenders include Columbia Pictures, Toyota, Activision and Samsung. Bristol's NBA categories are more or less congruent with TNT's base.

On the booze front, ESPN's NBA coverage appears to attract a more upscale tippler, as its top five spirits backers include Patron, Johnnie Walker, Grey Goose and Hennessy. Along with Smirnoff, those brands account for $2.96 million in ESPN's overall NBA haul.

While the early results add up to a nice chunk of change, it's worth mentioning that the real money starts rolling in during the postseason. From April 18-May 27, NBA playoff games generated $389.3 million in ad sales revenue, per iSpot.tv data, or more than three times what ESPN and TNT have pulled in over the course of the first five weeks of the current season.

The six-game 2015 NBA Finals on ABC contributed another $223.9 million to the postseason mix; all told, the two-month stretch of playoff and championship games helped scare up well over a half a billion dollars ($613.2 million) in sales. The Warriors' triumph over LeBron James and the Cleveland Cavaliers averaged 20 million viewers and an 11.6 household rating, which marked a 25% improvement from the 9.3 rating delivered by the five-game Spurs-Heat Finals in 2014.

If the laws of probability demand that the Warriors must eventually drop a game or two, there are plenty of emerging narratives to keep viewers turning out in droves. The hard-charging Cavs are on a mission to bring Cleveland its first title in 51 years, Paul George is putting together a comeback for the ages in Indiana, the Celtics are threatening to return to prominence in the Atlantic Division, and Kobe Bryant's swan song promises to be a season-long exhibition of abysmal play and sloppy hagiography. (As much as it stings to see a great athlete in decline, for Kobe haters -- and they are legion -- the downfall of the man who refers to himself as "Vino" is at once riveting and hilarious. With apologies to Dan Holm, watching Kobe throw up bricks night after night is truly Must-See TV.)