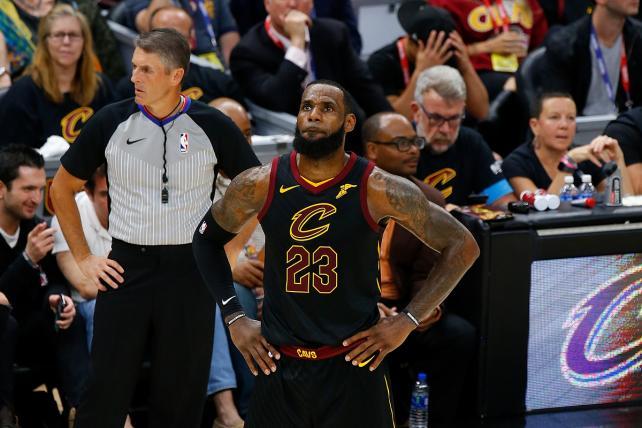 LeBron James, #23, of the Cleveland Cavaliers during Game Four of the 2018 NBA Finals.
Credit: Photo by Justin K. Aller/Getty Images

That the 2018 NBA Finals ended in a sweep was less than ideal for ABC and its advertising partners, but despite the short run, the ratings for the fourth consecutive Warriors-Cavaliers championship series weren't a total letdown.

According to Nielsen live-same-day data, Golden State's decisive victory over LeBron James and his Cleveland Cavaliers averaged 17.6 million viewers and a 10.0 household rating, down 14 percent and 12 percent, respectively, compared to last season's five-game set. Year-over-year comparisons were particularly knotty; in delivering an average audience of 20.4 million viewers per broadcast, the 2017 Finals was the most-watched NBA title tilt in 19 years.

If the Warriors' ruthlessly efficient dismantling of the Cavs robbed ABC of a potential ratings bonanza—Game 7 of the exhilarating 2016 series averaged a staggering 30.8 million viewers and a 15.7 household rating, making it the most-watched, highest-rated NBA game of the post-Michael Jordan era—the mismatch still managed to outshine the century's two preceding sweeps. Warriors-Cavs IV out-delivered the 2007 San Antonio-Miami wipeout (a record ratings bust that also featured LeBron) by 89 percent, and edged the Lakers' 2002 sweep of the Nets by 11 percent.

While the inane debate about the relative greatness of LeBron James and Michael Jordan will continue to rage on for as long as there are Hot Takes to be levied, there's no question who the bigger TV star is. Along with his untouchable career scoring average of 30.1 points per game, His Airness' Nielsen deliveries will never be surpassed. Jordan's final game as a Bull earned him a sixth NBA championship in 1998 and averaged an all-time high draw of 35.9 million viewers and a 22.3 household rating. Predictably enough, the six-game series also stands as the most-viewed NBA Finals, scaring up 29 million viewers and an 18.7 rating.

If the latest chapter in the Warriors-Cavs saga was rather anticlimactic, the more jaded fans among us may take solace in knowing that we very likely have seen the end of this particular dynamic. As much as no one knows for sure what uniform LeBron James will be wearing in October—in England, where you can bet on the date of your own death, oddsmakers favor a jump to Philadelphia, Los Angeles or Houston—it's also safe to assume that the four-year rivalry has run its course. (Which is not to say that the Warriors won't represent the Western Conference in next year's Finals. That team is going to eat the rest of the league's lunch for years to come.)

In suffering the rare sweep (there have been but five in the last 30 years), ABC was forced to leave as much as $150 million in ad sales revenue on the table. That calculation is derived from preliminary Standard Media Index estimates, which place the average cost of a 30-second ad in the first three games of the 2018 Finals at $634,627 per unit.

According to iSpot.tv data, the biggest spenders in the Finals were Universal Pictures ("Jurassic World: Fallen Kingdom," "Skyscraper," "The First Purge"), Kia, YouTube TV, Facebook, Columbia Pictures ("The Equalizer 2," "Sicario 2: Day of the Soldado"), Toyota, Wells Fargo, Nissan, American Express and Apple (iPhone). According to media buyers, much of the studio money that had been earmarked for Game 5 and beyond has been reallocated to Fox and Telemundo's coverage of the 2018 FIFA World Cup.

Movie represented the most free-spending NBA Finals category, per iSpot, which pegged studio spend at some $21.6 million. Automotive investment added up to an estimated $17.9 million, while quick-service restaurants like Taco Bell, Burger King, KFC and McDonald's contributed $10.7 million to the ad kitty.

As it happens, last week gave rise to three coronations over the course of as many days. Twenty-four hours before the Warriors seized their third NBA crown in four years, the Washington Capitals won their very first Stanley Cup Final in their 44-year history. The Caps' 4-3 victory over the upstart expansion team from Las Vegas helped secure NBC's highest NHL ratings in three years, as the five-game series averaged 4.79 million viewers and a 2.7 household rating.

The evening after the Cavs lifted the Larry O'Brien Championship Trophy over their heads, the three-year-old chestnut colt Justify made thoroughbred racing history when he became only the thirteenth horse to win the Triple Crown. Unfortunately for NBC, Justify's perfect run at Saturday's Belmont Stakes was no match for the 2015 race run by American Pharoah, who in clinching the first Triple Crown in 37 years helped serve up NBA Finals-size ratings.