NBC Braces for Yet Another Mammoth Super Bowl Rating 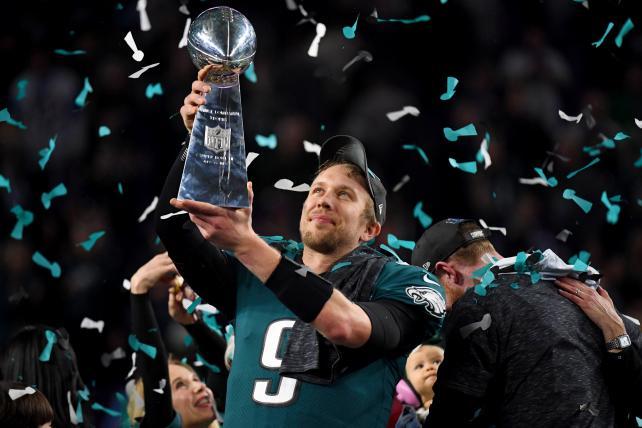 The preliminary ratings data for Super Bowl LII have trickled in, and while the numbers offer a decidedly incomplete picture of last night's turnout, they also suggest that the electrifying Eagles-Patriots showdown will go down as one of the most-watched programs in TV history.

According to Nielsen fast affiliate estimates, NBC's broadcast of Philadelphia's 41-33 victory over New England averaged 95.2 million viewers, down 6 percent versus the early results for last year's historic overtime match-up. Bear in mind that the final live-plus-same-day data will prove to be much more robust once the deliveries in the Pacific time zone are properly adjusted.

While it's premature to establish how the overall audience for Super Bowl LII will shake out, the official ratings data should be available by around 3 p.m. EST. At the very least, we can expect NBC to have averaged well north of 100 million viewers, although if we were to place a wager on the final outcome, we'd put a few simoleons on a range between 108 million and 110 million total viewers.

As an example of how much the early Super Bowl ratings tend to tick up upon application of the official data, the preliminary average for Fox's coverage of Super Bowl XLVIII was "just" 96.9 million viewers—which soared to a then-record 112.2 million when the live-same-day data hit the Nielsen wire.

If the fast affiliate data is directional at best, the overnight ratings for Nielsen's 56 metered markets make for an even hazier set of projections. Philly's big win averaged a 47.4 household rating, making it the ninth-highest overnight in Super Bowl history. And while the early-morning snapshot would seem to indicate that Super Bowl LII scared up a massive audience, direct correlations between the metered market estimates and the finals can be hard to come by. For example, Super Bowl XXI, which CBS aired way back in 1987, put up the sixth-highest overnight (47.9), although the final data pegged the average audience at 87.2 million viewers.

Approximately 39.8 million adults 18-49 watched last night's Super Bowl broadcast; as is the case with the overall deliveries, the demo numbers should adjust up in live-same-day. Meanwhile, NBC's post-game airing of a Very Special Episode of "This Is Us" is likely to have been watched by anywhere between 25 million and 28 million viewers.

Per Nielsen, 70 percent of all TVs in use last night were tuned in to NBC's presentation of the Super Bowl. The top metered market was Buffalo, which drew a 56.4 overnight rating; No. 2 Philly did a 56.2 rating and No. 3 Boston averaged a 55.9.

Eighty-one percent of all TVs in use in Philadelphia and Boston were riveted to the Big Game.