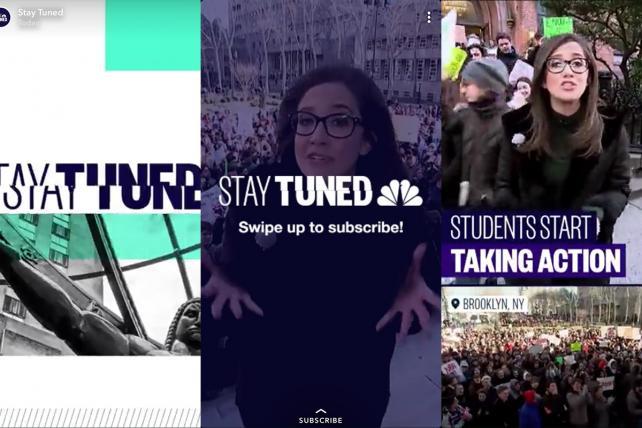 "Facebook doesn't have value for publishers really," Lack told reporters during a press briefing on NBC News' digital initiatives on Wednesday. "I call them Fakebook."

"What's frustrating about Facebook is you can't have a relationship with them," Lack said, adding that NBC News has talked with the company for years about content creation, but he has become "decreasingly hopeful" that much will materialize.

NBC News has pulled back a great deal from Facebook, said Nick Ascheim, senior VP of digital at NBC News. It now uses Facebook to link to stories, but it doesn't create original content for the platform.

Instead, it is putting much of its efforts into Snapchat, where in July it began the twice-daily news show "Stay Tuned."

Publishers want platforms they work with to help generate traffic, brand awareness and revenue, Ascheim added. Facebook isn't checking even one of those boxes, he said.

It doesn't come as much of a surprise that NBC News is talking up Snapchat, even beyond its commitment to "Stay Tuned." Parent NBC Universal invested $500 million in Snap Inc. last year when the company went public.

"Stay Tuned" hit 5 million subscribers on Tuesday, according to NBC News. It is on track to hit around 37 million unique viewers in March after attracting 33 million in February, Ascheim said. And 75% of the audience is under the age of 25.

The show and its hosts, Savannah Sellers and Gadi Schwartz, have become so popular, Ascheim said, that NBC News has contemplated creating "Stay Tuned" merchandise to sell.

"Stay Tuned" includes commercials, but NBC News is talking with advertisers about potential integrations and sponsorship opportunities and expects some such deals to close during TV's annual upfront ad negotiations. Snapchat has recently loosened up the rules about branded content on the platform.

While some publishers have expressed frustration over Snapchat's redesign, which began rolling out last month, Ascheim said NBC News hasn't experienced the same traffic declines that other publishers have reported. Completion rates for "Stay Tuned" fell at first as the redesign helped new people sample the show, he said, but those numbers have come back up.

"We always laugh about the Snap stuff you read, because we hear all the time folks are having a difficult time working with Snap, we have had an unbelievably fruitful partnership with Snap," Ascheim said.

Lack is also optimistic about YouTube, while acknowledging that it has sometimes let brands' ads show up on offensive content. And Google's AMP initiative, which helps mobile websites load more quickly and recently expanded to include a format similar to Instagram Stories, "shows real promise," Ascheim said. "If you lean into AMP. good things happen."

NBC News is also considering a 24/7 digital channel akin to CBS' CBSN. Lack said such a service was inevitable, but didn't provide any timeline. Ascheim said NBC News is still figuring out whether it would be a free, ad-supported service or depend on paying subscribers.

~ ~ ~
CORRECTION: An earlier version of this article said about 1.5 million people have watched at least three episodes of NBC's Snapchat show "Stay Tuned" in the last seven days. After publication, NBC said that number was incorrect. It declined to provide another figure, saying only that more than half the show's audience watches three times a week. The article also said NBC doesn't put any of its content on Facebook; more precisely, it links to its content from Facebook but does not create original content for the platform.