NBC's 'Chuck': From Uber-Dolt to Uber-Cool

NEW YORK (AdAge.com) -- With the fall season upon us, Ad Age TV Editor Brian Steinberg casts a critical eye on some of TV's new and continuing series to help marketers determine which may prove to be the best showcases for their ads and products. Tonight, NBC launches "Chuck," an hour-long show that mixes the spy thriller with a wry comedy, all centered on this year's favorite unlikely hero, the lovable nerd. 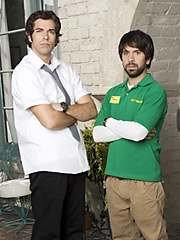 What you'll see: Finally, here's a show TV viewers can root for. With its focus on a socially inept tech nerd who finds himself part of a complex spy operation, "Chuck" could easily fall apart. And yet, it's funny, engaging, extremely fast-paced and just plain fun -- so much so that you hope the producers and writers keep their eye on the characters and the roller-coaster ride of being swept up into adventure and not the "Who's fighting whom?" that's so common in espionage dramas of this type.

At the center of "Chuck" is, well, the title character. Played by Zachary Levi as a winning mix of nervously funny Jimmy Fallon and quirky Jeff Goldblum, Chuck Bartoswki seems hopelessly lost. He runs the "Nerd Herd," a group of technology experts and repair gurus at the local "Buy More" electronics outlet. He lives with his sister and seems stuck on a girl he dated briefly in college.

Life changes quickly. An old college roommate, who just happens to be a spy (look, this is network-TV sci-fi; you'll have to suspend your disbelief), e-mails Chuck a file containing all kinds of creepy government secrets. Chuck just so happens to download them into his brain upon reading said e-mail (disbelief still suspended?). Anyhoo, what ensues is delightful mayhem, with nerdy Chuck suddenly wanted by everyone from the NSA to a sexy blonde CIA agent (Yvonne Strahovski), who may or may not be someone Chuck can trust.

Suddenly, Chuck goes from being uber-dolt to uber-cool, and the ride between the two is a blast. Thanks to super-fast pacing, viewers can indulge in escapism, following a naive character who gets swept up into events beyond his ken even as he uses his innate intelligence and fix-it skills to take on serious threats. Longtime couch potatoes will smell bits of "MacGyver" and "Alias" here, but so long as nerdy Chuck doesn't lose his inner dork, NBC could have a sleeper hit on its hands.

What's at stake: NBC has big ideas for Monday night, using "Chuck" to lead into last year's breakout hit, "Heroes," not to mention time-traveling drama "Journeyman" at 10 p.m. A successful "Chuck" would build a decent-sized audience for a night of sci-fi -- not the easiest trick to accomplish on network TV. "Chuck" will have to out-step "Dancing With the Stars" on ABC, which airs Mondays at 8 p.m., as well as CBS's slate of half-hour comedies.

Who's onboard: An NBC spokeswoman says the network has already secured some deals that will put products in "Chuck" but declined to specify the advertisers involved. The deals should become visible over the next few weeks. NBC's top sponsors for the first six months of 2007 include Procter & Gamble, Toyota Motor Corp., Johnson & Johnson and General Motors. The network typically caters to viewers with higher-than-average incomes and interest in more-intelligent-than-usual TV fare.

Your ad here? There are plenty of product-placement deals in the making here, if only NBC pushes for them. Chuck's "Nerd Herd" at the "Buy More" store is a direct rip-off of Best Buy's "Geek Squad." Chuck even goes shopping at a nearby "Large Mart" -- code for Wal-Mart, to be sure. Hot gadgets and cool cars ought to pop up in this drama frequently as the "Spy vs. Spy" stuff becomes more involved, not to mention laptop and desktop computers and other consumer electronics.

Media buyer's verdict: "Chuck" needs to compute with audiences quickly, as there are so many programs on the air this season that focus on the angst and drama of being a nerd in a cool person's world. Don't forget about CBS's "The Big Bang Theory," as well as CW's "Aliens in America" (which isn't about nerds per se but uses a similar fish-out-of-water premise).

"This genre is widespread, and most of them will not work," said Ira Berger, director-national broadcasting at Richards Group, who believes the success of "Heroes" last season has prompted more networks to test sci-fi fare. "Is there one show or two shows within an overused genre that might work? Most definitely. Is it going to be 'Chuck'? I don't know."