With audiences scooting to Twitter, Hulu, DVDs, programs on demand, and a library of shows recorded on DVRs -- to name just a few of the dozens of emerging video options out there -- it just made plain good sense, or so NBC Universal CEO Jeff Zucker theorized in various investor presentations, to cut back investment in flashy scripted dramas in favor of a program that cost less to make even if it drew fewer eyeballs. Broadcast TV (and NBC in particular) has been losing audience for years, so why not cook up a new economic model for a new reality? "The only sure way to declare defeat is to say, 'I'm going to keep doing it the same old way,'" Mr. Zucker said in March of last year.

But now NBC appears to heading back to the way TV networks have always done things. NBC didn't deny the slew of speculation late last week that it might cancel its 10 p.m. "The Jay Leno Show," move Mr. Leno back to his 11:35 p.m. roost and bump "The Tonight Show" to just after midnight; network spokespeople simply said they had "no announcements" to make at present. 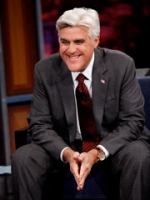 Jay Leno
What happened? NBC made its "Leno" move thinking about the future of broadcast TV, but in the process appears to have neglected what's required of the medium in the here and now for three core constituents: advertisers, audiences and affiliates.

Advertisers still want their commercials to reach the biggest and widest viewership possible, which is why they pay higher prices for prime-time ads on NBC, CBS and their brethren. Audiences still flock to dramas such as "24," "Lost" and "NCIS" that excite, interest and, yes, entertain them. Shows crafted with a bottom-line mentality don't cut it when there are so many other entertainment options available. And, after a truly rotten year for the business of local TV stations, network affiliates simply have to have the biggest audiences possible to feed into their late local news, often one of the most important advertising breadwinners on their schedule.

Low expectations
"The move of Leno to 10 p.m. was worth trying, but I think it's clear the only thing that can succeed in prime-time TV is a great series," said Paul Levinson, professor-communication and media studies at Fordham University.

The network didn't promise big ratings numbers for "Jay Leno"; one media buyer said the talk show was sold as almost "a separate day part" from the rest of the network's prime-time schedule. Rather than give advertisers extra ad time to make up for deficient ratings guarantees, NBC saw its ability to command solid ad prices for the time slot weakened.

A 30-second spot in "Jay Leno" cost between an average of $48,803 (Friday nights) and $65,678 (Tuesday nights), according to Ad Age's annual survey of ad prices for the broadcast networks' prime-time shows, negotiated during the upfront TV market. In contrast, NBC was able to secure prices of between $78,000 (for "Lipstick Jungle") and $146,679 for programs that aired in its 10 p.m. slot Monday through Friday in the 2008-2009 programming season.

The "Leno" maneuver also set up a ripple effect at the network. Mr. Leno's replacement at his previous roost, "The Tonight Show," has seen CBS rival David Letterman surge ahead in terms of total viewers. Some NBC dramas that once aired at 10 p.m., such as "Law & Order: SVU," have seen their ability to command ad prices erode in earlier time slots. Cult favorite "Southland" was jettisoned after NBC felt it was too dark in tone to air at an earlier timeslot. Time Warner's TNT will relaunch the program this week. If NBC, as expected, moves "Leno" back to a later time, it "signals to the affiliates that it takes their position seriously; it shows the advertisers that they are willing to admit their mistake and are taking steps to improve their product; and it signals to the viewer that they care about their quality," said Donald Seaman, VP-director of communications analysis at MPG.

With its move, NBC seemed to be trading lower ad prices for lower production costs, but that didn't take into account the needs of already hurting local affiliates, which found fewer viewers tuning in to their late-night news broadcasts. Those outlets, which have had a terrible year, particularly with the troubles of U.S. automakers, are some of the stations' biggest advertisers. TV stations were expected to end 2009 with lower-than-expected revenues of $15.6 billion, a 22.4% percent decline from 2008, according to BIA/Kelsey, an advisor to local media companies. From the get-go, affiliates have eyed the "Leno" show warily, with NBC's Boston affiliate initially saying it wouldn't run the program before backing down.

And while NBC's gambit seems to have failed, there's still the problem of readying TV for a future in which consumers carry portable screens with them and watch their favorite pieces of entertainment as they wish, not at specified times when advertisers can really lock them in.

"The whole affair mainly shows that [NBC] sees an industry in flux, and that they were prepared to take some unconventional risks, even if it doesn't work out," said MPG's Mr. Seaman.

Where will Leno go?

For starters, he would be charged with rescuing "The Tonight Show," which has plunged from first place in the late-night wars to a distant third. A shared hour would save both the timeslot and the terms of both hosts' contracts.

That is, if Mr. Leno doesn't find a way to jump ship for Fox, which he alluded to in a Jan. 7 monologue, hours after cancellation rumors began. If that unlikely scenario happened, it would require an even bigger schedule reshuffle. Fox doesn't air any programming past 10 p.m. during the week, allowing local affiliates to air syndicated repeats and 11 p.m. newscasts.