'This Is Unlike Other Upfronts,' Yaccarino Tells Media Buyers

The NewFront digital upfront presentations were conceived to mimic the traditional TV upfronts, where networks try to interest advertisers in buying huge amounts of ad inventory for the coming year. But NBC Universal didn't want its digital upfront Tuesday night to step on its traditional presentations either, so its pitch for 60 digital properties included no show screenings, relatively few celebrities and lots of concepts. 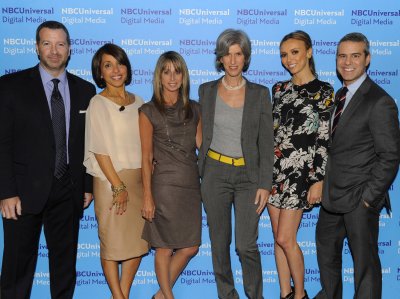 "This is unlike other upfronts," said Linda Yaccarino, NBC Universal's president-cable entertainment and digital ad sales, during the event at the Skylight West in New York. "We are not here to screen pilots. We are doing that every night at our cable upfronts."

Instead, NBCU used its pitch as an opportunity to explain to advertisers how they can use digital to complement their TV buys. And unlike pure digital players such as Yahoo and AOL, whose upfronts implied that web video could take the place of some TV buys, NBC Universal was careful to emphasize that its new platforms and online content wouldn't be possible without its portfolio of broadcast and cable networks.

Its latest digital offerings, which NBC Universal announced ahead of the presentation, include a Cyber Monday shopping event; lifestyle and fashion platform that melds DailyCandy and Style Network; a social-gaming network; Oxygen's social platform; a political app; and Fandango Cine, which targets Hispanic moviegoers.

The company also talked up its plans to live-stream every Olympic event this summer, an effort that Ms. Yaccarino predicted will become the biggest digital event in history.

Disney Interactive, whose digital upfront last week showed a similar interest in showing respect for the TV business, did show clips of short-form videos like "Moms Of," "That's Fresh" and "Talking Friends." While NBCU made mention of several online videos like iVillage's "My Best Idea" and "Inside Story" from DailyCandy, media buyers didn't get to see any of these projects.

But they did get a chance to have a hands-on experience in NBCU's "digital playground," which included DailyCandy's automated storefront vending machine and oversized tablets to show off apps.

The digital upfront featured fewer celebrities than TV upfronts typically involve, including the recent presentations by NBC Universal's E!, Oxygen and Bravo. "The stars are here tonight -- they are our digital assets and ideas," Ms. Yaccarino said.

But NBCU didn't go entirely without the help of its talent, with E! Entertainment's Giuliana Rancic and Bravo's Andy Cohen hosting the event; Joel McHale from "The Soup" and Carson Daly from "The Voice" making video appearances; and George Kotsiopoulos from "Fashion Police" and E!'s Ross Mathews introducing new platforms. The presentation ended with a performance by "The Glee Project" season 1 finalist Alex Newell, who made a cameo on "Glee" last month.