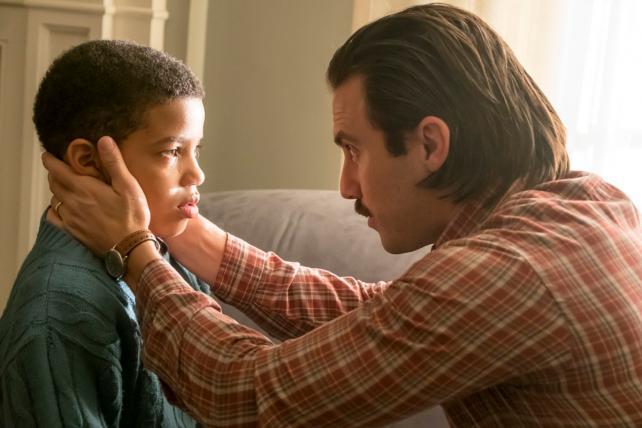 'This Is Us' was key to NBC's victory in the TV season that just concluded.
Credit: Ron Batzdorff/NBC

Wednesday night marked the official end of the 2016-17 broadcast season, and while the Big Four networks dutifully went through the motions of trying to spin the results in their favor, the continued erosion of primetime ratings was enough to repel the sunny blandishments of the PR hype machine. Not only did viewers roundly reject most of the new series that were introduced during the cycle, but the Nielsen numbers would seem to suggest that Americans are rapidly losing interest in the more established shows as well.

Although this season gave rise to one unequivocal new hit in NBC's "This Is Us," much of what qualifies as a success today would have been given the Old Yeller treatment out behind the barn as little as five years ago. According to Nielsen live-plus-same-day data, the average rating for all 46 freshman series that rolled out over the last 35 weeks on ABC, CBS, NBC and Fox was a miserly 1.0, which means that the products of the last development season managed to scare up just 1.28 million members of the key adults 18-to-49-year-old demo. Yipes.

For all that, "This Is Us" was not only instrumental in handing NBC another ratings win (see chart below), but it was a reminder that stories that are tuned to a certain emotional frequency can still resonate with millions of demographically desirable viewers. Young people haven't abandoned network TV entirely, but they do need to be presented with a viable reason to tune in. And even if the emo machinations of "This Is Us" aren't your particular cup of chamomile, that the show's upfront sizzle reel gave rise to a fair amount of "I'm not crying, you're crying" among the ranks of otherwise cynical New York media buyers last week suggests that NBC has something powerful on its hands.

For the purposes of this analogy, NBC is Roy Orbison.

While winning the annual broadcast ratings race is now somewhat akin to being voted the foxiest member of The Traveling Wilburys (given the state of the competition, it's perhaps not worthy of getting a swelled head), there's no denying that NBC's comeback has been nothing short of remarkable. After nearly a decade of getting left in the dust by the competition, the Peacock put together its first victorious season of the Comcast era in 2013-14, and since then it has gone three-for-four.

Given that NBC is all but assured of another victory at the end of the 2017-18 campaign -- its stewardship of "Sunday Night Football," Super Bowl LII and the 2018 Winter Olympics effectively guarantee another W -- it's understandable that the network hasn't brought on a whole bunch of new projects for the fall. NBC has just seven freshman scripted series lined up for the coming season, including three that will debut in September. Four years ago, NBC ordered 17 new scripted shows; the stability of its schedule is now on par with that of CBS.

Of course, "stable" isn't a synonym for "dynamic." But for "The Simpsons," which inched up a tenth of a ratings point, every single returning broadcast series this season experienced year-over-year declines. And in many cases, the bigger they were, the harder they fell. After two years at the top of the heap, Fox's "Empire" saw its live-same-day deliveries shrink 38% to a 2.8 in the demo, giving it a marginal lead over "This Is Us" (2.7). ABC's "Scandal" plummeted 29% and its ShondaLand battery mate "How to Get Away with Murder" fell 26%.

Interestingly enough, "Empire," "This Is Us" and "Scandal" happen to be among the biggest gainers upon conversion to the C3 currency. "Empire," for example, is on target to close out its third season with an average draw of a 3.6 in the guaranteed metric and at least a 4.0 in the extended-dance-remix that is C7. That said, the show is still down as much as 35% when its various commercial-ratings deliveries are held up against those from 2015-16.

Series declines naturally give rise to losses across the greater broadcast schedule, although NBC and Fox managed to halt any further year-on-year losses in prime. Fox, which was buoyed by its massive World Series ratings and the inevitable boost that comes with airing the Super Bowl, finished with a 1.9 in the demo for the third consecutive season, good for second place. CBS and ABC had a rougher time of it, and their respective drops compared to two seasons ago are particularly worrisome. CBS, which targets adults 25 to 54, has seen its share of the younger demo fall 22% since the 2014-15 campaign, while ABC's standing among the 18-to-49 set has shrunk 27% within the same timeframe.

If there's a certain parity to the final Nielsen numbers, with last-place ABC trailing top banana NBC by just one-half a ratings point (or around 641,600 advertiser-coveted viewers), the state of the broadcast union gets cozier still when sports and news are taken out of the mix.

Remove the NFL, NBA, MLB, NCAA and NHL from the data stream and the paucity of general-entertainment hits is readily apparent: NBC still wins the season, but with a miserly 1.7 rating. That barely edged out CBS and ABC, both of which averaged a 1.6 entertainment rating, although the real eye-popper was Fox's 1.3 tally.

This season marked the first time in 13 years that NBC won the entertainment-only demo derby. The last time NBC won a season with its sports and news programming stripped out, "Friends" was closing out its 10-year run with an average nightly draw of 21.4 million viewers and a 9.8 in the demo.

Sports accounted for nearly one-third of Fox's primetime ratings points, and that doesn't even take into account its Sunday NFL package. When football is in session, Fox's live coverage and shoulder programming account for a staggering 60% of its overall deliveries. By comparison, NBC in the September-January window derives 28% of its gross ratings points from the NFL, while pro football accounts for around 26% of CBS' in-season GRPs.

If you were stumped by Fox's decision to devote the first 20 minutes of its upfront presentation to its sports portfolio, there's your answer. (Hate to say we told you so, but…)

Speaking of sports, there's an argument to be made for applying some of the principles of hardcore baseball nerdery to the economics of TV. One of the more popular advanced statistics designed to enhance the empirical analysis of baseball is "VORP," which stands for "value over replacement player." In layman's terms, VORP is meant to demonstrate how much value a given player contributes to his team when compared to an imaginary below-average replacement player.

Switch out "player" for "programming," and you basically have a good idea of how a lot of decisions get made by top network executives. Knowing that new series have about a 65% failure rate and that the average delivery for a scripted TV show is now a meager 1.1, programmers assess the cost of bringing a new show onboard against the likelihood of its being able to put up bigger numbers than its predecessor.

This is part of the calculus that results in low-rated freshman shows like NBC's "Great News" (0.8) and Fox's "The Exorcist" (0.7) earning a second season. In the case of "Great News," NBC closed out the season with just five half-hour comedies on its schedule. The highest-rated, "The Good Place," averaged a 1.2 in the demo, while the lowest-rated, "Powerless," only managed a 0.7. Altogether, the five sitcoms averaged an 0.9 rating, which suddenly makes "Great News" a bit more viable. If the bar's already this low, who's to say that a new comedy would necessarily put up bigger numbers?

Our theoretical VORP metric also takes into account factors like studio provenance, which determines if the network can make money off the show on the back end, and whether or not Tina Fey is attached to the project. And wouldn't you know it, Tina Fey is an executive producer of "Great News," so congratulations on getting picked up for season two.

As far as "The Exorcist" is concerned, while it may be the lowest-rated freshman scripted series to eke out a renewal, it also matched or out-delivered Fox's other Friday night scripted options. "Rosewood" averaged a 0.7 rating in its second and final season, while the once-mighty "Sleepy Hollow" dwindled to a 0.5. And the cheapie replacement series, the unscripted "You the Jury," scratched out the lowest demo of the season, averaging just shy of a 0.4. In the land of the blind, the one-eyed man is king.

Diminished expectations have led to a reduction of scripted series orders. Earlier this month, the networks trotted out 39 new scripted shows for the delectation of media buyers and advertisers, down from an average of 50 freshman efforts that were ordered each season between 2013 and 2016.

Naturally, as live ratings continue their inexorable slide toward the fractional, the mental gymnastics required to justify renewals is only going to get twistier. During the season that just ended, the average 18-to-49 rating for a renewed freshman scripted series was a 1.3, which is roughly half what was required just six years ago, when the average re-up drew a 2.5. And very little light gets in between the doomed and the saved. The average rating for a canceled freshman scripted show in 2016-17 was a 0.8, which marked a 53% decline from 2011-12.

Dig deeper into the performance of the individual series and it becomes painfully evident that broadcast TV is all about ever-diminishing returns. In the spring of 2012, CBS canceled the Rob Schneider comedy "¡Rob!" after it had averaged 11 million viewers and a 3.3 in the 18-to-49 demo. In other words, CBS dumped a show that out-rates everything on this season's leader board (the top-rated scripted show, "The Big Bang Theory," averaged a 3.1).

If it's now almost impossible to fathom pulling a show that averages nearly 4.25 million demographically relevant viewers, it's worth noting that the same season CBS parted ways with the typographically adventurous "¡Rob!" it launched "2 Broke Girls." That half-hour comedy, which was recently canceled after a six-season run, averaged a 4.3 in the 18-to-49 rating during its maiden run.

At the risk of sounding like a broken record…

A word about live-same-day ratings. As much as they do not measure delayed viewing that takes place via time-shifting, the live-same-day numbers remain statistically congruent with the final C3 data. The average lift for a given show's final C3 rating versus its initial live-same-day delivery this season was just two-tenths of a ratings point, or approximately 256,640 adults 18 to 49. Sure, there are outliers (like the aforementioned "Empire," "Scandal" and "This Is Us"), but by and large, the live-same-day numbers are an accurate reflection of where the C3 deliveries will wind up. Because people who time-shift generally don't watch the ads.

The currency against which the vast majority of TV ad transactions are made, C3 blends a very rough estimate of average commercial ratings with three days of time-shifted viewing; as such, it offers networks, buyers and marketers the best approximation of actual ad deliveries. Or, to put it more plainly, C3 (and increasingly C7) are quite literally the only relevant ratings data. While the networks do not make the currency data public, favoring instead the stats-padding live-plus-three-day and live-seven numbers that omit commercial deliveries altogether, the ratings that matter to advertisers are C3/C7.

Obtaining the C3 deliveries can be akin to nailing Jell-O to the wall, as the networks would prefer that the general public remain unenlightened about the fact that there generally is very little difference between the live ratings and the currency data. Yes, the industry is agitating for more inclusive metrics that count up "every eyeball," but as long as C3 and C7 remain the benchmarks against which $75 billion in annual TV ad sales transactions are guaranteed, they should not be supplanted by the inflated DVR numbers that are peddled by the networks and breathlessly regurgitated by the vast majority of outlets that cover the TV business.