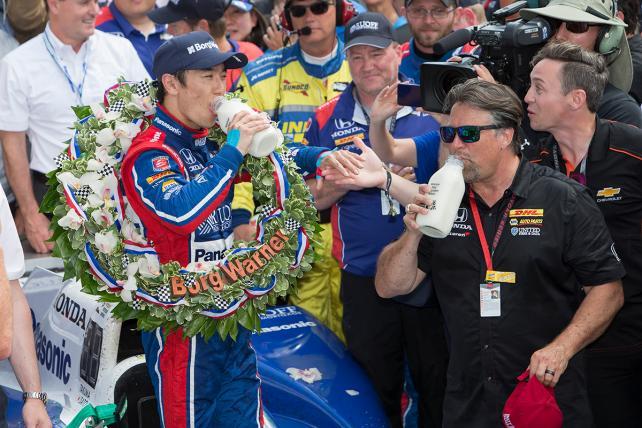 Takuma Sato wins the 101st running of the Indianapolis 500 on May 28, 2017.
Credit: Photo by Khris Hale/Icon Sportswire via Getty Images

After more than a half-century of ushering in Memorial Day weekend on ABC, the Indianapolis 500 is shifting gears. As part of a newly inked three-year deal with NBC Sports, as of 2019 all IndyCar races, including the event that has long been promoted as "The Greatest Spectacle in Racing," will air on NBC and its affiliated cable-sports network and streaming services.

In moving to an all-NBC Sports schedule (ABC and the Peacock have split the rights to the open-wheel racing series since 2009), IndyCar brings the curtain down on one of sports media's most enduring traditions. ABC's stewardship of the Indy 500 goes back to June 5, 1965, when a taped presentation of the race aired on "Wide World of Sports" five days after the last driver crossed the finish line. That partnership pales only in comparison to CBS's coverage of the Masters Tournament, which began in 1956.

The new rights deal increases the number of IndyCar events that will air on broadcast TV from five races to eight. The remaining races will be carried on the cable network NBCSN. All IndyCar events will be live-streamed via NBCSports.com and the NBC Sports app, and an unspecified menu of IndyCar content will be made available to subscribers of the premium over-the-top service NBC Sports Gold.

Negotiations with both current right holders began last spring, with IndyCar looking to consolidate its media package under one network group. Financial terms were not disclosed, although IndyCar higher-ups had been said to be looking to secure rate double-digit rate increases, on a percentage basis. Altogether, NBC's current deal was said to be worth $60 million at the time of the signing.

"We've seen consistent growth for IndyCar on NBCSN in the past decade, and we hope to continue that growth throughout the series by leveraging [NBC Sports'] television, digital, production and marketing assets," said Jon Miller, president, Programming, NBC Sports and NBCSN.

NBC will promote its all-inclusive IndyCar pact as part of its annual "Championship Season" marketing campaign, which kicks off in advance of the May 5 Kentucky Derby, a sports offensive is designed got get fans fired up about a slew of NBC-hosted sporting events ranging from the aforementioned Run for the Roses to the French Open, NHL Stanley Cup Final and Premier League Championship Sunday.

With an average draw of 502,000 viewers, last year marked the second most-watched IndyCar season on NBCSN.

"This arrangement brings all of IndyCar to one home, increases our exposure and includes our first direct-to-consumer offer for our fans," said Mark Miles, CEO of Hulman & Co., the parent company of IndyCar and Indianapolis Motor Speedway, in a statement.

The deal marks the second time in the five years that NBC Sports has outmaneuvered ABC/ESPN for the rights to a marquee motorsports property. NBC in 2013 inked a 10-year, $4.4 billion pact to carry the back half of what was then known as the Nascar Sprint Cup series (Monster Energy last year assumed the sponsorship banner), displacing ESPN. Fox Sports continues to air the first 13 top Nascar races, a slate that includes the Daytona 500.

ESPN, which pays the freight for the sports properties that air on its sibling net ABC, may have elected to walk away from an IndyCar deal in order to save a few million bucks. The network's sports-rights packages with the NFL, NBA and Major League Baseball alone cost $4 billion per year, and that already-princely sum doesn't include the $608.3 million that ESPN pays for the College Football Playoff or its side deals with top-tier collegiate conferences like the ACC and SEC.

"It has been our distinct honor to be partners for so many years," said Burke Magnus, ESPN evec-VP of programming and scheduling, in a statement. "We look forward to the rest of our events this season and wish them all the best in the future."

Having secured its media rights deal, IndyCar continues to search for a replacement for series title sponsor Verizon, which in 2014 signed a five-year, $50 million promotional and advertising agreement with the racing organization. Human & Co. is said to be looking to double the cost of the current IndyCar sponsorship.