In an effort to distance itself from the highly publicized Trayvon Martin case, 20th Century Fox has changed the name of the upcoming Ben Stiller movie "Neighborhood Watch" to simply, "The Watch." 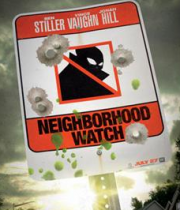 The poster for the movie under its original name

While the comedy, which also stars Vince Vaughn, Jonah Hill and Richard Ayoade, bears no resemblance to the murder case, Fox became uncomfortable with the title because Trayvon Martin's shooter was part of his own local neighborhood watch group.

"As the subject matter of this alien invasion comedy bears no relation whatsoever to the recent tragic events in Florida, the studio altered the title to avoid any accidental or unintended misimpression that it might," Fox said in a release.

Fox had been pulling back marketing for the movie following the media buzz and social debate sparked by the Trayvon Martin case. But the studio has decided to not push back the opening of the movie, which is still scheduled for June 27.

The announcement came as Fox rolled out new marketing for the summer flick, including a new "red band" age-restricted trailer.