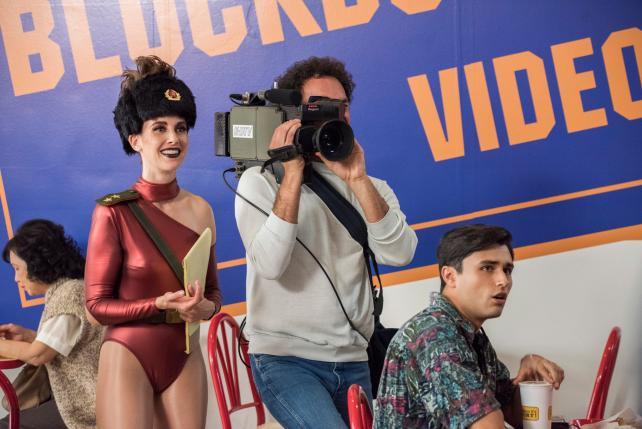 'Glow,' one of Netflix's many originals.
Credit: Netflix

A month after a big miss on its projected second-quarter subscriber additions led to a harrowing $24.2 billion erosion of its market value, Netflix on Monday announced that Chief Financial Officer David Wells is leaving the company.

Wells, who has served as CFO of the wildly popular streaming service since 2010, will stay onboard until his successor is hired. In a statement, Wells said his post-Netflix endeavors would "focus more on philanthropy."

Wells' tenure as Netflix's financial leader coincided with the company's evolution from a service that shipped physical copies of DVDs to subscribers' homes to its current status as the 800-pound gorilla of the streaming-media space. Along the way, Wells pumped billions of dollars into the development of original series such as "House of Cards," "Bojack Horseman," "Stranger Things" and a half-dozen shows based on characters from the Marvel Cinematic Universe.

While there's no indication that Netflix plans to alter its spending strategy—the company says it's on pace to invest as much as $8 billion on original programming and licensed content this year alone, a drop in the bucket compared to the $22.5 billion in annual content costs Goldman Sachs projects the service will be on the hook for by 2022—some investors believe Netflix can't continue to burn through cash at such a giddy rate.

Netflix increasingly has turned to debt as a means to finance its ambitious programming scheme. (In May, Chief Content Officer Ted Sarandos told the crowd at the MoffettNathanson Media & Communications Summit that Netflix would have "1,000 original releases this year," with as many as 470 slated to bow before Dec. 31.) As of June 30, Netflix had amassed $8.34 billion in long-term debt and another $4.54 billion in current content obligations; all told, the company's balance sheet points to $18.2 billion in liabilities versus $3.91 billion in cash on hand.

In addition to forking over billions of dollars for individual series and movie titles, Netflix also has spent a small fortune in order to poach high-octane showrunners such as Shonda Rhimes and Ryan Murphy from traditional TV. Sarandos said that Murphy's $300 million deal is a function of Netflix wanting to establish an exclusive relationship with the creator of "Glee," "American Horror Story" and "9-1-1" while keeping its licensing costs in check.

"Prior to the Netflix deal, Ryan had a deal with Fox, so if we wanted a Ryan Murphy show, we'd have to buy it from Fox," Sarandos said at the MoffettNathanson conference. "The clearing price to get it from Fox kept going up and up and up because Fox would like us not to have a Ryan Murphy show. So instead, Ryan Murphy will make those shows for Netflix, which is a good thing."

Investors who are bullish on Netflix—and they are legion—tend to shrug off any discussion of the company's spendthrift ways, pointing instead to its global reach of 130.1 million subscribers and $150.6 billion market cap. By way of comparison, the media/entertainment titan Walt Disney Co. boasts a $167.6 billion valuation, while NBC Universal parent Comcast has a market cap of $160.7 billion.

Wall Street types that are more skeptical of Netflix's profligate ways say that the only way the company will continue to grow at its breakneck pace is if it can keep luring new subscribers. Netflix's July stock plunge was a reaction to disappointing customer acquisitions in the second quarter; while it added 5.2 million subs versus the year-ago period, that was 1 million shy of its own projections.

Not making matters any easier for Netflix's future growth prospects is the pressure brought to bear by streaming competitors like Amazon Prime, Hulu and Disney's nascent direct-to-consumer service, which wags have dubbed "Disneyflix." In another offensive maneuver, Disney on Jan. 1 will pull its content from Netflix, which analysts believe represents some 6 percent of Netflix's overall deliveries.

There's also the matter of Netflix's recent cold streak, during which it has unleashed a string of critically panned series like "Insatiable" and the blink-and-you-missed-it comedy "Everything Sucks!" For every "Stranger Things," Netflix manufactures dozens of pricey, largely neglected curiosities like "The Get Down" and "Gypsy."

Whoever Wells taps as his replacement, Netflix is unlikely to deviate from its extravagant game plan. As CEO Reed Hastings explained in a 2017 earnings call, the guiding principle of the company is to put up a great deal of capital up front and then reap the benefits of owning all that original content down the road. "The irony is the faster we grow, and the faster we grow the owned originals, the more drawn on free cash flow that we'll be," Hastings said. "So in some senses, negative free cash flow will be an indicator of enormous success."

Hastings on Monday praised Wells as a "valuable partner" who "skillfully managed our finances during a phase of dramatic growth that has allowed us to create and bring amazing entertainment to our members all over the world while also delivering outstanding returns to our investors." Hastings went on to say that he was looking forward to working with Wells to identify a new CFO "who will help us continue to pursue our ambitious goals."