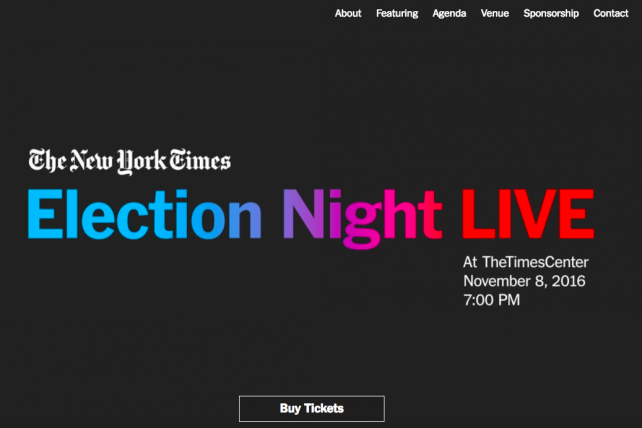 For many media companies, live events and conferences are a growing revenue stream. So it's not surprising that some publishers are hosting events on election night, Nov. 8, and selling tickets.

The New York Times, which hosted a large election event in 2008, is doing so again this year. For $250, ticket-holders are invited to hear Times reporters, editors, and executives -- including executive editor Dean Baquet and CEO Mark Thompson -- as well as "special guests" discuss the election. Guests will also be able to attend a cocktail reception after the forum ends.

The Times Center, where the event will be held, holds approximately 350 people. "We expect to have a full house that night," a spokeswoman said. If the company were to sell all 350 tickets, the event could bring in $87,500 in revenue.

Back in 2008, the Times charged $85 for tickets, but this year's event will be bigger, and will have food, an open bar, and music, the spokeswoman said.

Digital magazine Slate is holding a ticketed event for the first time, at The Bell House in Brooklyn. Tickets for the "live election night extravaganza" go for $30. Mike Pesca, who hosts "The Gist" podcast, and Jacob Weisberg, who runs the company and hosts the "Trumpcast" podcast, will be on hand.

"Party with your favorite podcasters, and as the evening progresses, Mike and Jacob will discuss up-to-the-minute results with an all-star lineup of influential thinkers, writers, and comedians," the invitation says. "This one-of-a-kind gathering will be the ideal place to watch the country's future unfold -- and perhaps say a collective farewell to Trumpcast when the Donald loses."

The venue fits about 400 people, and the event is "pretty much sold out," Slate President Keith Hernandez said.

Slate has put on more than 20 ticketed events this year. "Live events is a natural extension of our business, as it's an intimate, personal experience for our fans," he said.

The Tennessean, a Nashville newspaper published by Gannett, is also holding an election night event. For $15, 50 guests will get "a tour of the presses, traditional Election Night newsroom pizza and discussion with our journalists plus a Tennessean goodie bag."

While these are the only paid events that Ad Age could be find, other media companies are also hosting get-togethers. The Washington Post is holding a watch party at the newspaper's new headquarters, sponsored by the MGM National Harbor casino. The event is free to attend for those invited.

The Atlantic is "exploring" the possibility of holding an event, though it's not likely to be ticketed, a company spokeswoman said.

NBC News is also holding an election night "event" in VR, in case you're interested in attending a media election party without having to leave your couch.