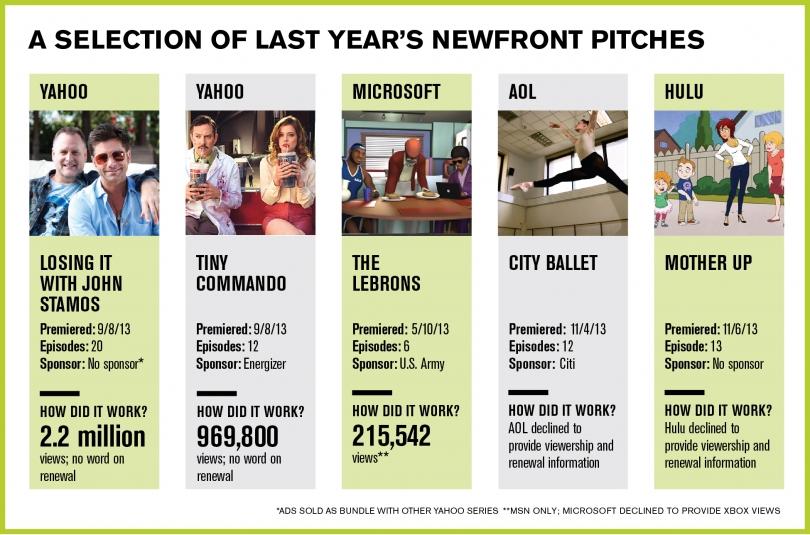 Getting advertisers to spend their dollars on web video through the Digital Content NewFronts has proved to be a big challenge for companies like Yahoo, Microsoft and AOL. In response, they're tweaking their pitches to feel more like a TV buy.

A major obstacle for the NewFronts is supply. There's enough digital video that advertisers don't feel the urgency to make commitments ahead of time. And many individual web series reach discouragingly small audiences.

Then there's the ask. Unlike TV networks at the upfronts, NewFront presenters often want marketers to sponsor whole series.

The NewFronts are "really about beyond-standard advertising," said UM Chief Investment Officer David Cohen. They're less about just buying "off a rate card, and a little more of an integration."

It's worked to a point. AOL scored sponsors for nine of the 15 shows it presented in 2013, including "City Ballet" (Citi); "#Candidly Nicole" (Old Navy); and "Fatherhood" (Disney).

Hulu signed deals for three of the eight original series it pitched last year and already has sponsors in place for renewals of "The Awesomes" and "East Los High."

Yahoo secured a sponsor for one of its six shows, the Ed Helms effort "Tiny Commando," which got backing from Energizer.

The shows that didn't get overarching sponsors were still produced but were relegated to less-lucrative ad support like pre-rolls and banners.

Some marketers still wonder whether individual upfront commitments to web video are worth the money or at least are unwilling to place big bets that a single show will attract a worthwhile audience. A few companies that pitched show-sponsorship deals last year were looking for $2 million to $3 million commitments, said one media buyer. "For the reach they were providing, it's more efficient to go out and do a cable buy or a broadcast buy with brand integration," the buyer said.

Agencies and media companies won't say how much money advertisers commit in the NewFronts. For what it's worth, 78% of people who attended last year's presentations said they walked away with "at least one new opportunity for their company or client," according to a survey by the Interactive Advertising Bureau, which manages NewFronts programming.

Audience most important
This year some NewFront presenters are moving away from exclusive show sponsorships in favor of deals that could accommodate multiple advertisers and spread the risk. Instead of buying all the ads for a show, a media buyer can purchase a package of programs with similar audiences, according to an agency exec who has received NewFronts previews and described the new sales strategies as "a lot like what broadcast or cable networks are presenting."

"The more these folks highlight their ability for mass reach, the specific audiences they can reach as well as content that's relevant for particular brands, that's what our brands are interested in," Mr. Bluman added.

The NewFronts are becoming TV-like in other ways. "More and more, just like the TV upfront presentations, the NewFront is not just a one-time-a-year event," said Jackie Kulesza, senior VP-group video director at Starcom USA. "We're working with vendors all year long. We're talking about what's in the pipeline and how we can work together and do different types of deals."