News Corp., the publisher of newspapers such as the Wall Street Journal and New York Post, reported a 2.8% decline in first-quarter revenue, hurt by shrinking demand for print advertising. 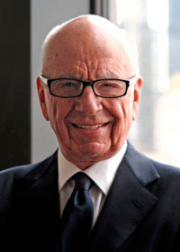 Revenue fell to $2.07 billion in the period, which ended on Sept. 30, down from $2.13 billion a year earlier, the New York- based company said today in a statement. Analysts had predicted $2.18 billion, according to data compiled by Bloomberg.

The news division, which publishes newspapers in the U.S., the U.K. and Australia, saw revenue fall 10% to $1.5 billion in the period, with Australia accounting for most of the decline. Circulation and subscription sales also shrank in the period, dropping 6%.

"We must generate more advertising revenue, but be less dependent on advertising," News Corp. CEO Robert Thomson said in a conference call to discuss the results.

He also said the company needs to renew its focus on mobile and boost its subscriptions. It has been trying to boost subscription revenue with new services such as Dow Jones's DJX, aimed at professional and corporate customers.

News Corp., controlled by Chairman Rupert Murdoch, split off from 21st Century Fox at the end of June, creating a new business focused mostly on publishing. In addition to owning newspapers such as the U.K.'s Times, News Corp. held on to an Australian TV business, which includes a 50% stake in pay-TV company Foxtel.

Splitting the newspapers from the more lucrative TV and film businesses is expected to increase the pressure on individual publishing brands such as the Post. An unidentified analyst even predicted to New York magazine last month that the "first question every analyst will ask" on the new company's earnings calls will be: "How much is the Post losing?"

As it turned out on Monday, analysts were more preoccupied with business in Australia, currency fluctuations and the like. None asked about the Post, and its finances were not broken out.

News Corp. shares fell 2.7% to $16.95 in extended trading after the results were released. They had gained 10% this year through today's close.

Excluding some items, profit was 3 cents a share, just above the 2 cents that analysts had estimated.

When Murdoch split News Corp. from 21st Century Fox, he provided the publisher with $2.6 billion in cash. News Corp. also has said it will pay a dividend at some point in the future, without specifying the date or the amount.