The Plan Behind Newsweek's Return to Print: Charge Readers More Than Before | Ad Age
Skip to main content
Sign In Register

The Plan Behind Newsweek's Return to Print: Charge Readers More Than Before

When Newsweek returns to print early next year, it will resemble the "love child of The New Yorker and The Economist," according to Jim Impoco, Newsweek's editor since September. 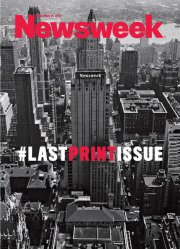 Newsweek's last print issue in the U.S., published in December 2012

Mr. Impoco sent a shockwave through the media world Tuesday after he told The New York Times that Newsweek would begin printing again starting in January or February. The reaction from some quarters wasn't kind, either, with Vanity Fair joking that it was a better idea than reviving Newsweek as a CD for sale in Tower Records -- but only just.

It's a bold decision, at the least, when weekly magazines face challenges in print. New York magazine this week announced its decision to cut its print frequency. And Newsweek's last attempt at a makeover, under high-profile editor-in-chief Tina Brown, failed to change the economics.

But Mr. Impoco said Newsweek's return can succeed by shifting from a model where advertisers subsidize low subscription prices to one where readers foot the bills, an approach he compared to The Economist.

"It costs a certain amount to produce a print product, but traditionally companies were charging less than the cost and hoping advertisers would make up the difference," Mr. Impoco said. "Basically, we'll charge consumers more than it costs us to produce it."

Most publishers have long used cheap sub offers to generate big audiences and thereby attract advertisers. Newsweek averaged 1.35 million paid print subscriptions in the second half of 2012, its final six months in print, down from 1.39 million in the second half of 2011, according the Alliance for Audited Media. The new print edition will shoot for roughly 100,000 subscribers in its first year, Mr. Impoco said.

Newsweek plans to build the foundation for its subscriber base slowly, according to Mr. Impoco. It will begin partly by selling issues at locations such as Barnes & Noble and airports, hoping to convert newsstand buyers into new subscribers. It also plans to pitch subscribers to its current news app -- there are "several hundred thousand," according to Mr. Impoco -- on trading up to a package that includes print as well.

Newsstands have been brutal for magazines on the whole for years. Industry wide single-copy sales in the first half of this year declined another 10% from the period a year earlier, according to the Alliance for Audited Media. And general-interest news in print has proven a soft target for digital competitors and more focused magazines.

Newsweek will answer with a renewed editorial approach that will resemble The New Yorker's reporting style, according to Mr. Impoco. "We're putting a huge emphasis on reporting," he said. "We're hiring people with forensic reporting skills and setting them loose."

The magazine is aiming for about a 64-page weekly edition. Owner IBT Media is still determining the price, Mr. Impoco said. Any advertising would be "icing," he added.

Even as New York reduced its frequency to every other week from something close to weekly, a handful of other publishers have charged ahead in the space. Bauer Media, which relies almost entirely on newsstand revenue, introduced a new celebrity weekly in November. And on Tuesday, Dennis Publishing's The Week said it would increase the number of issues it publishes to 51 from 48 next year. The Week draws 65% of its revenue from readers, the company said.

The decision to revive Newsweek in print, Mr. Impoco said, came from IBT Media, which bought it from IAC/InterActiveCorp in August. "The owners say there is a certain amount of clamoring -- people were pining for the print version," said Mr. Impoco.

IBT Media made the decision only a month ago to fire up the printing press, according to Mr. Impoco. "They move really fast," he said. "I'm already working on issue No. 8 or 9 now."

Newsweek still publishes English-language editions in Asia, Europe, Latin America, the Middle East and Africa from a headquarters in Pakistan.

"People are looking at this as if it's a big change of direction," he said. "We have a magazine app; now we're going to have another platform. Of all our platforms, print will be the smallest."

"There is a certain convenience to print and some people like to cuddle up as a magazine," he added. "We think we can make the economics work."