Newsweek.com's Defense and the Dead's Rising Wave on Facebook

It's the Best Media Writing of the Week

Transmedia class warfare. It happens, most recently on the occasion of the merger of Newsweek and the Daily Beast merger. That meeting of unprofitable publications has forced a digital conundrum whose likely conclusion is Newsweek.com taking one in the head. That this was a development announced in the media before it was related to staff is one of the many aspects of the announcement that annoyed an anonymous staffer who took to Tumblr to defend the site: 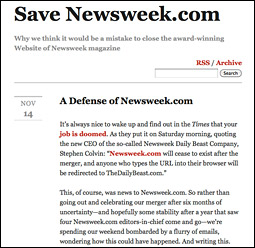 While high-level print editors were taking sleek, black town-cars to and from the office (and everywhere in between, including, on at least one instance, from DC to New York), this was a staff who slept on grimy couches while reporting on the road; forking out their own funds, at times, just to produce good work. The disparity in work hours, in pay, in resources -- it was comical. And it was only telling that not so long ago -- let's say five years -- one high-level company executive had to be corrected about the Website's URL: no, Newsweek.com wasn't the same thing as the internal Newsweek intranet.

File this one under "Dear God, Please Let It Be So. I Beg of You." The New York Observer's look at the trend of journalists reinventing themselves as writers and consultants for the video-game industry will instill a flicker of hope in all those underemployed hacks wiling away their time playing "Black Ops" instead of pitching the Awl. While the number of journos who have made this leap doesn't comprise what you'd call a zombie horde, writer Dan Duray identifies a few high-profile examples, such as Tom Bissell, the novelist who, in a moment that would make Oscar Wilde smile, once managed to coordinate his addictions to cocaine and "Grand Theft Auto." That was chronicled in this March piece in the Guardian. Here's what he's up to now:

"In the lit biz, I'm, to quote Ron Burgundy, I'm kind of a big deal," said Mr. Bissell, who's also had a hard time entering the field. "But in video games, no one cares." Though that's changing in Mr. Bissell's case. He was just named to Game Developer magazine's power list and just this past Monday spoke about video-game design at Drew University in New Jersey ... he's working to increase his involvement by getting into the process early. In addition to working on a project involving a major movie license, Mr. Bissell and his partner, Rob Auten -- who, as a recent graduate of the Dartmouth English department, found himself writing the cut scenes for the widely praised "Far Cry" in 2003 -- have been shopping around a "comedy shooter," complete with mission and design documents which detail gameplay, and concept art. They've been kicking around the idea of asking Junot Diaz to voice the main character, because Mr. Bissell is fond of the nerd-friendly author's performances at readings.

It's well-known that Nick Denton is willing to pay sources for information, a policy that could get very expensive very quickly if he didn't have guidance for what he expected for his money: $10,000 per one million new visitors. Joshua Benton at the reliable Nieman Journalism Lab took a look at recent examples to see how they're performing against Mr. Denton's ratio -- pretty well, actually -- and offered some thoughts about the tiny little economy of paid scoops that seems to be working Gawker chief's favor.

When we think of the effects of new price competition online, we often think of it driving prices down. When there are only a few people competing for an advertising dollar, they can charge higher rates; when there are lots of new competitors in the market, prices go down. But Denton's basically arguing the equally logical flip side: I can afford to pay so little because there aren't enough other news orgs competing for what sources have to offer. Let's hope we don't get to that same point with journalists.

When Mary Meeker drops a report on the state of the internet, everyone listens, including the folks at Business Insider, who also post it as a slideshow.

This post from the 1000 Memories blog merits inclusion because of its sheer macabre weirdness. The first thing you need to know about 1000 Memories is that it's a service that allows people to create online memorials for the dead. When they look at Facebook, they see dead people. Lots of them. They've done the back-of-the-death-certificate math and figured out that 1 million or so people on Facebook are probably dead. Like literally dead, as in not breathing, not simply playing Farmville. And they foresee 50 million ghosts -- their term -- by 2015, essentially turning the social network into Sigourney Weaver's apartment building at the end of "Ghostbusters." Growth industry!

One of the most surprising phenomena of 2010 is the encroachment of death onto Facebook. Just like "Toy Story 3," the blissful youth of Facebook is suddenly faced with the passing of time and the first inklings of mortality. However, beyond the anecdote of an awkward experience, surprisingly few facts exist about the prevalence of death on social media. Is this an occasional curiosity or a looming tidal wave for which existing social media sites are unprepared?